Every birdie and every eagle made at the BMW PGA Championship will contribute £10 and £100 towards the Campaign Against Living Miserably (CALM). 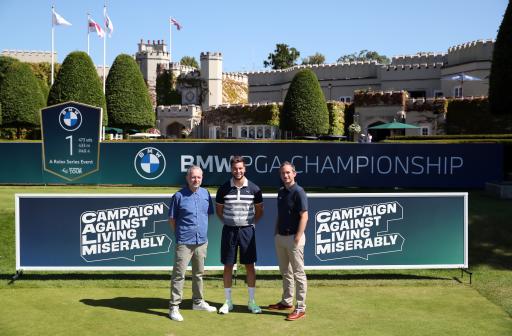 Suicide prevention charity Campaign Against Living Miserably (CALM) has been made the official charity of the BMW PGA Championship at Wentworth in September.

Every birdie that is made throughout the week at the DP World Tour's flagship event will make £10 and every eagle will make £100 for CALM’s life-saving work in promoting conversations about mental health.

"We are thrilled to have been chosen as the beneficiary for this year’s BMW PGA Championship," said Simon Gunning, CEO of CALM.

"At a time when more people than ever need our support, it is a brilliant opportunity to be there for the golfing community, as well as raising vital funds for our life-saving services."

"We are very proud to have CALM on board as the Official Charity of the 2022 BMW PGA Championship," said Kit Gartrell, the tournament’s Championship Director.

"It’s a been a tough couple of years for many reasons, and as a charity focused on mental health and suicide prevention, CALM’s front line services have been there for whoever has been struggling, whatever they have been going through.

"Like all sports, golf has great mental health benefits and at the DP World Tour we are very passionate about promoting those benefits to young people, so our thanks go to BMW for being the driving force behind this partnership and we hope to help spread CALM’s message of uniting the UK against suicide."

The BMW PGA Championship is set to provide another highlight of the UK summer with a world-class field teeing it up on September 8 at one of the DP World Tour's most iconic venues.