BMW PGA Championship weekend sells out for first time ever

Rory McIlroy, Jon Rahm, Matt Fitzpatrick, Billy Horschel, Tyrrell Hatton and Danny Willett are set to tee it up at the BMW PGA Championship at Wentworth. 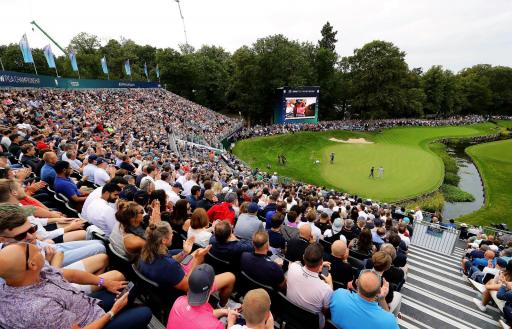 The BMW PGA Championship has sold out for the weekend for the first time ever, continuing the huge demand for the DP World Tour's flagship event in 2022.

The fourth Rolex Series event of the season will see a world-class field tee it up in September. Rory McIlroy, Jon Rahm, defending champion Billy Horschel and US Open Champion Matt Fitzpatrick are all set as well as past champions Danny Willett and Tyrrell Hatton.

McIlroy, Rahm and Fitzpatrick have been some of the biggest advocates of the PGA Tour and the DP World Tour in recent months, while more and more players decide to switch alliances to the LIV Golf tour.

The week at Wentworth will provide fans with a festival of golf and entertainment and tickets are still available for the other days, but fans are encouraged to act now to avoid disappointment.

The action begins on Tuesday when the practice day is preceded by the second and final round of the G4D @ BMW PGA Championship, which will see some of the best golfers with disabilities battle for the title at the prestigious venue.

The opening two rounds of the tournament on Thursday September 8 and Friday September 9 provide an opportunity to watch the whole field in action before the cut falls.

"With a world-class field including Rory McIlroy, Jon Rahm, Matt Fitzpatrick and defending champion Billy Horschel, as well as Jax Jones providing a DJ set and Razorlight bringing their stadium rock to the Slingsby Showstage, it is set to be an incredible week for the whole family.

"Tickets still remain for the Celebrity Pro-Am which always provides a hugely entertaining curtain-raiser for the main event, while we would also encourage fans to pick up their tickets for Thursday and Friday - when they can watch all of their favourite players before the cut falls - to avoid disappointment."