Collin Morikawa is all set for his return to the DP World Tour and he is taking his most prized possession with him to the Abu Dhabi HSBC Championship. 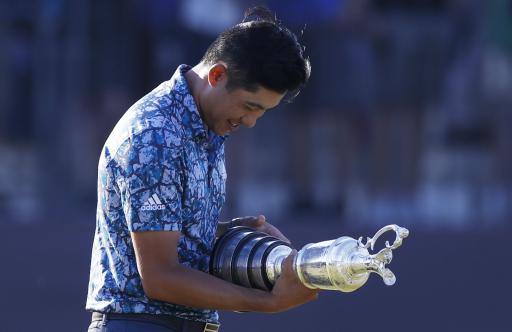 Collin Morikawa is on his way back to the Middle East for the first DP World Tour stop of 2022. Could he add the Abu Dhabi HSBC Championship to his impressive record?

The World No. 2, still on his quest to become World No. 1, is currently travelling to Abu Dhabi to build on his DP World Tour Championship victory in November.

Morikawa posted an image on his Instagram story of his luggage at Abu Dhabi International Airport and one of his bags was a large case that contained the Claret Jug.

"FYI, the Claret Jug does not fit in a normal overhead bin," the 24-year-old joked. If I were him, I wouldn't let that treasured case leave my sight.

Morikawa impressively won The Open Championship back in July at Royal St. George's. It was the second time in his career that he won a major title on his debut.

The American won the 2020 PGA Championship at TPC Harding Park on his first appearance in the tournament. He beat Dustin Johnson and Paul Casey by two shots.

When he snatched the DP World Tour Championship two months ago, he became the first man from the USA to win the Race to Dubai.

Morikawa will headline another stellar lineup next week on the DP World Tour at Yas Links. Rory McIlroy, Viktor Hovland, Tyrrell Hatton, Lee Westwood, Adam Scott, Tommy Fleetwood and Shane Lowry are all set to tee it up on Thursday.

Hatton is the defending champion of the tournament after he won by four strokes a year ago. Fleetwood has won it twice while Westwood and Lowry have also tasted success in the UAE.

NEXT PAGE: KEVIN KISNER ON RYDER CUP SELECTION DISAPPOINTMENTS: "THEY DON'T LIKE ME"