Ian Poulter continues to have plenty of fun on the social media platform ahead of the first DP World Tour event of the season. 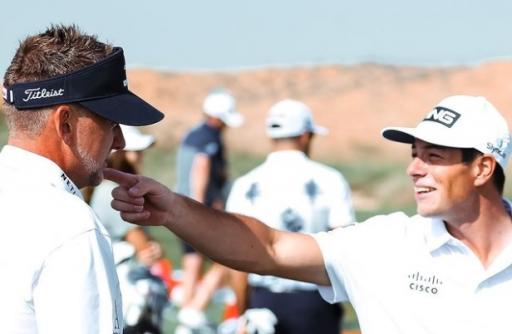 Ian Poulter continued to prove he is the new king of golf social media as he mocked both himself and Viktor Hovland on his latest Instagram photo ahead of this week's DP World Tour event in Abu Dhabi.

Poulter posted an image of Hovland pointing at his chin while on the range at Yas Links on Sunday.

The Englishman took aim at himself and then poked fun at the talented Norweigian.

"Yes yes Viktor Hovland it's a double chin... something you'll find out in about 20 years," Poulter captioned his post.

Hovland is a 10/1 third favourite to win this week's Abu Dhabi Golf Championship, while Poulter is at slightly larger odds of 40/1.

Poulter may have had a run of missed cuts towards the back end of 2021 but he did finish well in his last tournament at the DP World Tour Championship in November with a tie for sixth.

Collin Morikawa, who won that DP World Tour Championship to take the Race to Dubai for the first time in his career in 2021, has rightly been installed as the joint favourite for this week's event in Abu Dhabi.

Rory McIlroy has come close to winning this tournament multiple times down the years and the Northern Irishman joins the American at the head of the betting.

Other big-name players in the field include Tommy Fleetwood, Shane Lowry and defending champion Tyrrell Hatton, who won by four shots at Abu Dhabi Golf Club 12 months ago.

NEXT PAGE: PGA TOUR PRO DENIED RELIEF BUT THEN CLEVERLY ASKS FOR ANOTHER RULING AND MAKES BIRDIE!