Ratchanon Chantananuwat is an incredible talent and he almost became the youngest ever winner on the Asian Tour at The Singapore International. 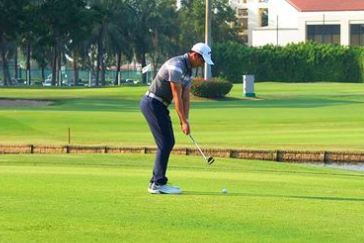 Ratchanon Chantananuwat may not have won this week, but he impressively finished third at The Singapore International on the Asian Tour.

Ignore the fact that an amateur finished third, but focus on his age. Chantananuwat of Thailand is just 14 years old and he almost became the youngest ever winner on the Asian Tour.

At the event held at Tanah Merah Country Club, Chantananuwat was only one of three players to finish under par at the event. The highlight of his week was a 66 in the second round.

Chantananuwat was one of only two amateurs to make the cut at The Singapore Invitational and with 10 holes remaining, he briefly held the lead. This was helped by making six birdies in his first 11 holes of round four.

With cards of 75, 66, 76 and 69, the young superstar finished on 2-under-par and just two shots behind the eventual winner and fellow teenager Joohyung Kim of South Korea.

In 2019, Kim won the Panasonic Open in India at the age of 17 which made him the second-youngest winner on the Asian Tour.

Chantananuwat was playing in his first professional tournament outside of Thailand and he leads what appears to be an exciting crop of Asian golfers emerging in 2022.

He is currently ranked at 107 in the World Amateur Golf Rankings. He is also entered in the SMBC Singapore Open at Sentosa Golf Club next week.

The PGA Tour is currently graced with many great Asian golfers such as Hideki Matsuyama, Sungjae Im and Si Woo Kim and it won't be long until we see the continent's challenge grow even stronger in America.

NEXT PAGE: HOT HIDEKI MATSUYAMA: DO THE STATS SHOW THE WAY FOR HIS EIGHTH PGA TOUR WIN?