Danny Willett fired a superb score of 65 on Friday at The Belfry as he put himself back into contention to win the Betfred British Masters. 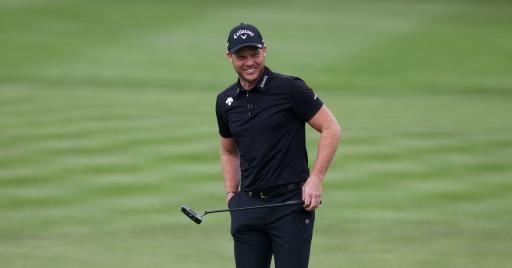 Tournament host Danny Willett set The Belfry alight in the second round of the Betfred British Masters, carding a 65 to reach 6-under-par for the week.

Willett shot a disappointing score of 1-over-par in the first round, but he put this behind him with five birdies in his opening 8 holes earlier today.

The former Masters champion, who will make £1,000 for Prostate Cancer UK for each birdie he makes this week, added three more birdies on his second nine.

Despite making a sole bogey on the 9th hole, his final hole of the day, the Englishman reached 6-under-par for the week and got to within two shots of Richie Ramsay who led at that stage on 8-under-par.

Willett tied for 11th at this event last year at the same historic venue and he believes his score won't be far off the lead heading into the weekend.

"We played really well today, that was the only green we missed there on the 9th, lots of birdies and lots of chances and we took a lot. I'm trying to spend Betfred's money and there was £8,000 more today for Prostate Cancer UK so we're going in the right direction.

The third hole with @Danny_Willett

"This game is about fine margins, (I) holed a couple of nice putts early on and the greens were running nicely this morning. (It was) just one of those days really, we hit a lot of good golf shots and capitalised when we could.

"We basically hit all of the par-5's in two and made three easy birdies there and a couple of bonuses coming down. It's a strange way around. This golf course plays pretty tough in the middle section from hole 6 through to hole 12, then there are chances on both sides.

"It was quite nice for that to come later on in the round today where we already had a few birdies under our belt and we didn't feel under too much pressure to do anything and I actually played them all really well today.

"I didn't think we'd see that number this morning, but I was swinging ok on the range and whatever it's going to be by the end of the day, it's not going to be too far off."

The 34-year-old, who has won eight times on the DP World Tour, has been plying his trade on the PGA Tour of late. He came tied 12th at Augusta National and finished tied 21st alongside Tyrrell Hatton at the Zurich Classic of New Orleans.

His finest hour came at The Masters in 2016 when he capitalised on Jordan Spieth's infamous collapse. Willett won by three shots from the American and his friend Lee Westwood in second place.

2016 was also the year that Willett made his Ryder Cup debut. He failed to earn a point for Darren Clarke's Team Europe, but at The Belfry on Friday, he confirmed that Rome in 2023 is very much on the agenda.

"I can remember watching the Ryder Cup last year and seeing the lads come up against one of the strongest teams they've (USA) have had for about 50 years and they all played well.

"Not only did they have some great players, they actually played well, they like each other and get on too. It would've been a real tough ask for anyone to have gotten close to that team in America.

"But watching it, it makes you want to get there and help support the lads and fingers crossed, we can keep playing well and be there for Henrik. I'd like a few more shots at it."

Next Page: Sergio Garcia rants to PGA Tour official: "I can't wait to leave this tour"