Eddie Pepperell bounced back on Friday from a slow first round to move into the red for the weekend at the Betfred British Masters. 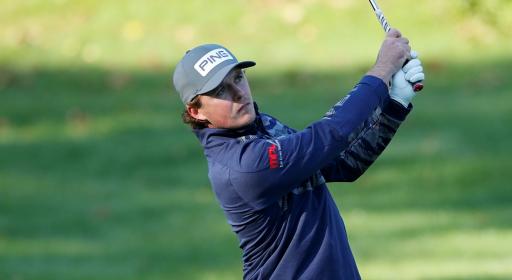 Eddie Pepperell received rapturous applause and loud cheers when he rolled in his birdie putt on the 9th and last hole of his second round of the Betfred British Masters.

Having shot 1-over-par in the first round, the Englishman recovered on Friday at The Belfry with a solid score of 69. He moved to 2-under-par and six shots behind the leader at the time Richie Ramsay.

Pepperell showed a lot of inconsistencies on Thursday in the Midlands, but his bogey-free card today made the six blemishes he made on day one a distant memory.

The 31-year-old won this event in 2018 and this was his most recent victory on the DP World Tour. His other victory came in the same year at the Commerical Bank Qatar Masters.

"Pretty good, it was quite hard out there and it was cold this morning and playing quite long. The pins were quite tough and the course isn't that easy so you need to hit a lot of good shots and I feel like I did," Pepperell told GolfMagic.

"I played well all day, I was solid and I probably played especially well on my back nine coming in. To have the finish that I had coming in on some tough holes when knowing I needed to as well was some of the better golf I've played for what feels like an eternity.

"I've always had really good support and given the last couple of years of what it's been like, it's obviously nice to come back and play with people again in front of people, so a few family and friends too and generally good support too.

"Anytime playing in the UK is great, the British Masters especially. Since 2015 when it came back, it's probably been one of the best events on tour and it continues to be.

"If I can continue doing what I'm doing, as cliché as that sounds, and especially like my back nine today, I think I'll give myself a good opportunity to shoot four, five or six-under-par as then the weather is meant to be quite nice at the weekend too.

"Scoring should be pretty good, but a mid-to-high round in the 60's would be a great target as the weekend looms."

The early part of the day at The Belfry belonged to Danny Willett. The tournament's host shot a superb 65 to reach 6-under-par for the tournament.

Much like Pepperell, Willett shot 1-over-par on Thursday but eight birdies in his second round have put him in contention to win his 9th DP World Tour title.

Next Page: Sergio Garcia rants to PGA Tour official: "I can't wait to leave this tour"