Sergio Garcia appeared to confirm that he wants a release from the PGA Tour after an outburst at a rules official during the first round of the Wells Fargo Championship. 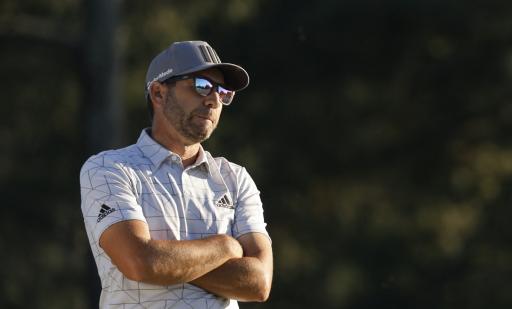 Sergio Garcia has all but confirmed his intention to join the LIV Golf Invitational Series after he ranted to a PGA Tour rules official during the first round of the Wells Fargo Championship.

While searching for his ball to the left of the par-5 10th hole at TPC Potomac, the Spaniard was enraged that the clock had started for him to search for his ball in the thick grass.

When he was informed of the early clock, Garcia let loose on a rant that would suggest he intends on being released from the PGA Tour to play in the LIV Golf Invitational Series.

"I can't wait to leave this tour... (I) can't wait to get out of here... just a couple more weeks until I don’t have to deal with you anymore," Garcia appeared to say while trudging through the vegetation.

Ironically, the 2017 Masters champion went on to make a par and card a solid round of 3-under. He is tied with European Ryder Cup teammate Rory McIlroy after day one in Maryland.

Sergio Garcia, frustrated with what he thought was the early start of the clock to look for a lost ball, seemingly telling a rules official…

…I cant wait to leave this tour

…cant wait to get outta here

…just a couple more weeks until I don’t have to deal with you any more pic.twitter.com/k1qRRYbmsF

Garcia is one of many players rumoured to be interested in the breakaway golf series which begins at Centurion Golf Club in June. It is being commissioned by Greg Norman and bankrolled by the Public Investment Fund of Saudi Arabia.

This incident comes a day after both Lee Westwood and Richard Bland revealed they had requested releases from the DP World Tour and the PGA Tour to be able to play in the eight-event series.

Speaking at the Betfred British Masters at The Belfry, Westwood defended his decision and believes that the concept of change is what people don't like in the golf world.

"I've supported the European Tour for 29 years, I've gone over and won on the PGA Tour in 1998, not taking a card. I've had brief goes on the PGA Tour and given up my card at certain times over there for personal things," said Westwood.

"It's being portrayed as an 'us and them' whereas people from LIV Golf have said they want to stand side by side. They're not going up against any of the really massive tournaments, they want everybody to have opinions and they're not forcing anyone's hand.

"People always have a problem with change, don't they? They're sceptical about it, and people like continuity and they like the same to carry on. But change in competition is good in any walk of life I think. It shakes things up, keeps everybody on their toes and keeps everybody trying to improve."