Tiger Woods would jump more than 1,000 spots in the world rankings if he were to win the Hero World Challenge in December. 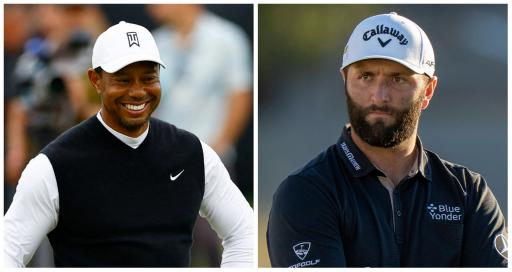 It's probably unlikely given what we've seen of Tiger Woods in 2022, but if he were to somehow win the Hero World Challenge he would jump more than 1,000 spots in the world rankings.

This is according to the reliable golf stat account @VC606, who has already crunched the numbers.

If Woods wins the 18-man PGA Tour event in Albany, Bahamas, then he would jump straight into the top 250 players in Official World Golf Ranking.

The 15-time major champion has only played in three events - all of them majors - since his car crash in February 2021.

Woods returned to professional golf at the 86th Masters - made the cut - but struggled over the weekend at Augusta National.

He made the cut once again at the U.S. PGA Championship at Southern Hills, which was won by Justin Thomas, before withdrawing after 54-holes looking visibly worse for wear.

After skipping the U.S. Open at The Country Club at Brookline - won by Matthew Fitzpatrick - Woods participated in the 150th Open Championship at St. Andrews that resulted in tears over the Swilcan Bridge.

That being said, the lack of competitive action for Woods has seen him plummet down the world rankings.

And he's not even a LIV Golf player.

The Hero World Challenge will take place over 1-4 December. It will be the start of a very busy month for Woods as he is down to play next iteration of The Match.

He has not confirmed his appearance yet but he will likely team up with son Charlie Woods to take part in the PNC Championship in late December. .

Here is the full field of the Hero World Challenge:

Hideki Matsuyama has withdrawn from the Hero World Challenge

If Woods were to somehow win and jump that many places it would certainly reignite the discussion over world rankings.

Jon Rahm has been in supreme form of late but described the Official World Golf Ranking system as "laughable" before he won the DP World Tour Championship in Dubai.

Rahm doubled down after his win.

Rory McIlroy disagreed with Rahm, claiming the system is fair.

Next page: Tiger Woods' legendary caddie is coming out of retirement