The DP World Tour has confirmed their season-long points competition will be re-named once again after Rory McIlroy finished No.1 once again in Dubai. 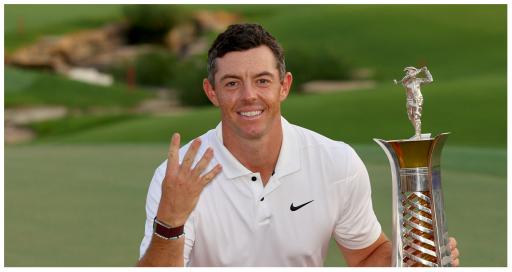 The European-based DP World Tour has announced from 2023 onwards the season-long points competition will be renamed the Race to Dubai Rankings in Partnership with Rolex.

You might recall that over the years the name has changed more than once. The race to crown its No. 1 player was of course previously known as the European Tour's Order of Merit.

This was before the European Tour re-branded to the DP World Tour and strengthened their ties with the PGA Tour after the emergence of the breakaway LIV Golf League.

Colin Montgomerie won the Order of Merit a record eight times between 1993-2005. The name was changed to the Race to Dubai from 2009-2021 and subsequently the DP World Tour Rankings this season.

Related: How much they all won at 2022 DP World Tour Championship

Rory McIlroy claimed this honour for the fourth time over the weekend with his fourth placed finish at the season-ending $10m DP World Tour Championship in Dubai on the Earth Course at Jumeirah Golf Estates that was won by Jon Rahm.

The DP World Tour confirmed the news on Monday. From next season the leading eight players will share and increased bonus pool of $6m as part of an overall $114.2m prize fund across 39 tournaments in 26 countries.

"The Race to Dubai is a strong narrative for us, reflecting our season-long contest which builds towards the final Rolex Series event of the year in Dubai, our DP World Tour Championship, where we crown our Number One player.
"We are therefore pleased to be bringing it back with the support of Rolex and today’s announcement further cements the long-standing relationship between the DP World Tour and the Emirate of Dubai - a relationship that dates back to the first staging of the Dubai Desert Classic in 1989.

"Our partnership continues to drive significant exposure for Dubai and its leading businesses on a global scale. The 2023 DP World Tour season promises to be one of our most exciting yet, with a record prize fund on offer. We look forward to seeing which player earns the right to be named the Race to Dubai champion at the DP World Tour Championship next November."

Past Race to Dubai champions include star the likes of the aforementioned McIlroy and Rahm, along with Tommy Fleetwood and Collin Morikawa.

The 2023 Race to Dubai will begin from November 24-27, 2022, with two tournaments - the Fortinet Australian PGA Championship and the Joburg Open in South Africa - co-sanctioned with the DP World Tour's strategic alliance partners the ISPS HANDA PGA Tour of Australasia and the Sunshine Tour respectively.

It will conclude with the $10m DP World Tour Championship which will take place at Jumeirah Golf Estates for the 15th consecutive year from November 16-19, 2023.

Next page: Take a look at the equipment used by Jon Rahm and Rory McIlroy