DP World Tour will follow in the footsteps of LIV Golf in Round 2 of the Dunhill Links with a SHOTGUN START! But there is a valid reason... 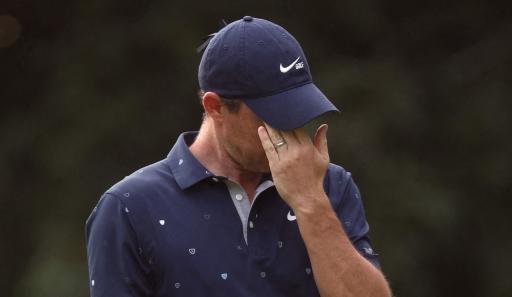 The DP World Tour has decided to follow in the footsteps of LIV Golf (for at least one day!) with a shotgun start in Round 2 of the Alfred Dunhill Links Championship.

The decision has been made by tournament officials as a result of "adverse weather conditions forecasted".

The famous Pro-Am tournament, which is staged over three courses (Old Course at St Andrews, Kingsbarns, Carnoustie) will see all players tee off at 8.30am on Friday.

Remaining groups will then follow straight in at 8.40am.

The Alfred Dunhill Links Championship will be a shotgun start tomorrow, in an attempt to combat the weather forecast pic.twitter.com/F9QZ2BCe0V

Rory McIlroy got off to a solid start on day one with a round of 4-under 68 at Carnoustie, which is typically the toughest test on the three-course rota.

McIlroy will now head to Kingsbarns for the 8.30am shotgun start on Friday, before taking his shot at redemption on the final two rounds at the Old Course at St Andrews where he agonisingly came up short in his bid to win the 150th Open Championship in July.

France's Romain Langasque has set a blistering early pace with a joint course record 11-under 61 on the Old Course.

While the decision to deploy a shotgun start on Friday is the most sensible call from tournament officials to ensure the event has the best possible chance to complete 72 holes and avoid a Monday finish, it is fair to say all the LIV Golf supporters out there have found the update rather entertaining on social media this afternoon.

The news comes just three weeks after the BMW PGA Championship was shortened to a 54-hole tournament.

Greg Norman's LIV Golf Invitational Series has operated a shotgun start in all of its tournaments this season and it plans to for the duration.

That decision has been seen as one reason why LIV Golf is currently shut out of receiving Official World Golf Ranking points, but the larger discussion is that their events are staged over 54 holes and for just 48 players.

LIV Golf players sent a signed letter "urging" OWGR chairman Peter Dawson for inclusion, but US Open champion Matt Fitzpatrick believes they will need to "just wait two years" for anything to happen as "those are the rules".

Some 11 current LIV Golf players are in the field at the Dunhill Links this week.

Here's a selection of tweets from golf fans about the DP World Tour deploying a shotgun start on Friday:

Breaking; in addition to tomorrow’s shotgun start at the Dunhill Links tournament, Greg Norman will be travelling in after play to distribute a large consignment of Heineken to spectators from the R&A balcony.

There will be a shotgun start at @dunhilllinks tomorrow! You could not make this up #LIVGolf

PUBLIC SERVICE ANNOUNCEMENT
Everyone confused and uneasy about the Shotgun Start at Dunhill Links tomorrow, here's an example of what that might look like. Don't be scared, Rory will be fine, keep calm and carry on.#Dunhilllinks #DPWorldTour #LIVGolf #golf pic.twitter.com/2RWkhClG8T

Rory on hearing about the shotgun start @dunhilllinks on @DPWorldTour pic.twitter.com/svNBfcUlIj

Next Page: LIV Golf play down latest rumour in the media