What is a shotgun start and why is this the LIV Golf format?

LIV Golf is looking to turn the sport on its head with an innovative new format which includes a shotgun start. It is intended to increase the pace and excitement of tournament golf. 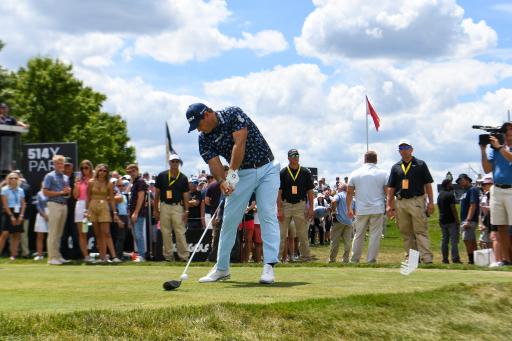 LIV Golf has introduced a completely different and unique format of professional golf with the shotgun start which they believe will lead to faster rounds and a more enjoyable experience for players and spectators.

A shotgun start is usually found at local golf clubs on an occasional basis and they are used to get as many players on the golf course at once, starting at the exact same time.

During the first LIV Golf Series event at Centurion in June, a flyover was used to signal the time when the first tee shots would be hit. A very interesting addition to proceedings indeed.

Time management is the key factor in a shotgun start on the LIV Golf Invitational Series.

During the first round of the third LIV Golf Series event at Bedminster, every group teed off at 1.15 pm and would have all signed for their scores at around 5.30 pm or shortly afterwards.

In a usual tournament's format, groups would tee off roughly every 10 minutes from hole 1 and this could continue for a number of hours until every player has teed off.

This causes a longer golfing day from start to finish, however, this is the traditional fashion in which professional and amateur tournaments are played on the PGA Tour and the DP World Tour. Shotgun starts aren't common in club golf, but at the same time, aren't exactly alien.

Two-tee starts are used frequently on the PGA Tour and the DP World Tour. This is when players can begin their round on either hole 1 or hole 10. This is also a strategy to get more players on the golf course at once in an efficient fashion.

LIV Golf has adopted the shotgun start because they believe a faster pace of play is what golfers and golf fans want to see. Your viewing experience would only last around four hours, whereas you could be spectating your favourite players all day in a traditional set-up.

"Don't Blink" is one of the many mottos that LIV commissioner Greg Norman and his team use to promote the Saudi-backed events. A shotgun start is one tool they use to support this particular phrase.

As well as using a shotgun start, LIV Golf has restricted tournaments to 54 holes over three days, as opposed to the stalwart system of 72 holes over four days.

Next Page: Greg Norman with another own-goal trying to make point about lady's game