Matt Fitzpatrick on LIV Golf players: "When you see pound signs, it maybe clouds your thinking a little bit." 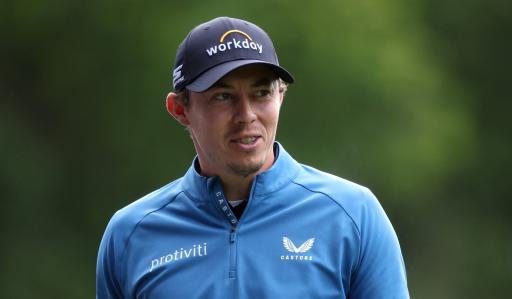 Matt Fitzpatrick believes LIV Golf players have "just got to wait two years" if they are ever going to receive Official World Golf Ranking points at all.

Fitzpatrick, who was speaking to Sky Sports' Jamie Weir ahead of this week's Alfred Dunhill Links Championship at St Andrews, made his comments be known just a week after all the LIV Golf Tour players sent a signed letter "urging" OWGR chairman Peter Dawson for points inclusion.

LIV Golf CEO Greg Norman is understood to be getting increasingly frustrated at being shut out of world ranking points in his tournaments, which are all staged over 54 holes and feature 48 players.

In the eyes of US Open champion Fitzpatrick, waiting is just all part of the process, just as we wrote about in a recent article on OWGR points.

"You knew what you were signing up for before you went"

Matt Fitzpatrick shares his thoughts on some of the LIV golfers writing to the Official World Golf Ranking demanding points... pic.twitter.com/BqEjPRHr1m

"I understand why they think they deserve points because of the players they've got, but if you look, so I've been told, all the other Tours in previous years that have wrote to get points they've gone through the official process it takes a year or two years, so you just got to wait two years. That's the process, and that's what it is," Fitzpatrick told Weir at the Home of Golf today.

"I did read somewhere they said you should back date the points to when they had their first event, which is ridiculous. You knew what you were signing up for before you went. If you had probably done your homework then you would know the process takes a year or two, so you probably had to accept that. It's the rules of the game."

Weir then asked Fitzpatrick whether he considered LIV Golf players had "buyer's remorse".

"I guess when you see pound signs it kind of maybe clouds your thinking a little bit. It's one of those where the decision that you made had to sit down and take every aspect into consideration, and obviously world ranking points was probably on the list but there probably wasn't a real deep dive into when the chances of getting them are.

"If the world ranking turned round and said to me 'oh no, the process is in three months', then I'd be like that's it, fair enough. But by the sounds of it, it's lengthier than that and they've got to fit a lot of criteria in that they're not quite fitting in already, then that's just the way it is unfortunately."

Rory McIlroy also spoke about LIV Golf with the media ahead of his shot at redemption at St Andrews, and he welcomed peace talks with the Saudi-bankrolled circuit.

In total, there are 11 current LIV Golf players competing on the DP World Tour this week.

It would have been 12 but Patrick Reed withdrew from the tournament earlier this week due to a mattress being "too soft" during his stay at a French hotel last week.

Do LIV Golf tournaments deserve OWGR points? Will it ever happen? Share your thoughts and comments over on the GolfMagic social media channels.