Richard Mansell exclusively tells GolfMagic after his second round of the Ras al Khaimah Championship: "I'm the only one who has the balls to wear it!" 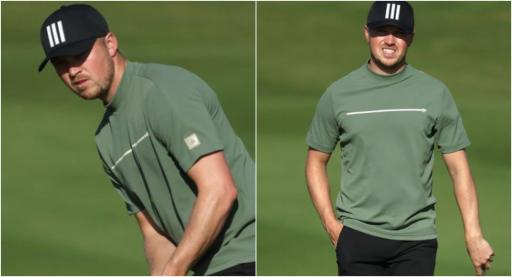 Mansell, making his first appearance on the DP World Tour in 2022, wore an adidas Golf shirt without a collar and wore it untucked, a style virtually unheard of in professional golf.

adidas Golf are a brand unafraid to push dress code boundaries in the game. They were one of the first brands to introduce the golf hoodie which was first worn by players such as Tyrrell Hatton.

The introduction of the golf hoodie became fairly popular on the PGA Tour in 2021. Rory McIlroy, Collin Morikawa and Justin Thomas wore them at different points while they were also used by Team USA at the Ryder Cup.

Mansell has previously worn adidas Golf products that have shifted the boundaries of clothing in professional golf, revealing that he is one of their only ambassadors who are prepared to try them on.

"adidas know that I am one of the only guys in Europe that has the balls to wear it really. They obviously want that shirt to be worn untucked and basically try and push the limit a little bit with it," Mansell told GolfMagic.

"Last year, I wore the three-quarter trousers, or with my ankles out, and a lot of the guys won't wear that sort of thing. Obviously with this day and age, with hoodies and that sort of thing, adidas are trying to move the needle.

"I really like it, I feel comfortable in it. It's what I'd wear back home if I was playing golf and I'd have no issue with going to the pub afterwards with some mates in it, whereas in some golf clothes you would because you'd feel like a golfer. It's aimed at young people."

The 26-year-old's comfort showed on day two of the Ras al Khaimah Championship at Al Hamra Golf Club. The Englishman shot a solid 70 on Friday.

He is 3-under-par for the week and will have work to do to secure his first DP World Tour victory. After tying the course record, David Law leads the way on 14-under-par.