Cameron Smith shot his second 66 of the week at the Royal Greens Golf and Country Club near Jeddah to sit two behind the leaders on Friday. 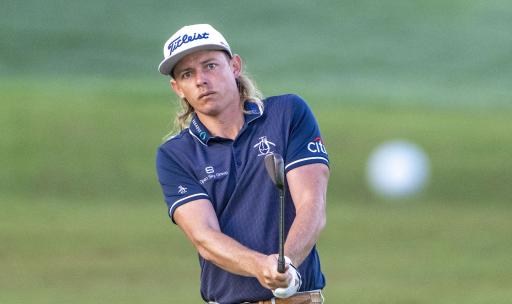 Cameron Smith is in great shape to secure his second victory of 2022 at the Saudi International as he shot another 66 on day two of the tournament.

Smith, who won the Sentry Tournament of Champions in January, made five birdies and one bogey in his second round at the Royal Greens Golf and Country Club.

Following up his 66 from day one, the Australian reached 8-under-par for the week and sits two shots behind the halfway co-leaders Harold Varner III and Adri Arnaus.

Smith has started his 2021/2022 in an impressive fashion. As well as his fourth PGA Tour victory, he finished tied ninth at the CJ Cup and tied fourth at the RSM Classic.

"You just need to hit it good off the tee. There's plenty of opportunities, plenty of wedges and just be real patient with it. The greens were nice this morning. Yeah, so just be patient with the golf course. It's got plenty of birdies," Smith said after his round.

"I like it windy. I grew up in the wind. Being from Australia, it's something you kind of have to get used to pretty quick. Yeah, you've just got to strike the ball well. You've just got to hit it out of the middle and judge your wind.

"It's a great tournament. I've really loved my week here so far. The course is great. The hospitality has been great. Yeah, can't wait for the weekend."

After his first round of 64, Varner III followed up with a 66 of his own in the Middle East to reach the top of the leaderboard alongside Arnaus, who spends most of his time on the DP World Tour.

Smith is tied with Matthew Wolff in third place after his round of 3-under-par moved him nicely up the leaderboard. Tommy Fleetwood is a shot further back in outright fifth place.

The trio of Phil Mickelson, Dustin Johnson and Tyrrell Hatton is six shots off the lead after 36 holes on 4-under-par.

Mickelson, who made headlines this week by accusing the PGA Tour of greed, shot a conservative 69 which included four birdies and three bogeys on the day.

2020 winner Graeme McDowell shot two disappointing scores of 73 this time around to miss the cut.