Tommy Fleetwood tees up chance for victory at Saudi International

Tommy Fleetwood is only two strokes off the lead going into the final round in Jeddah where there is an unlikely leader after 54 holes. 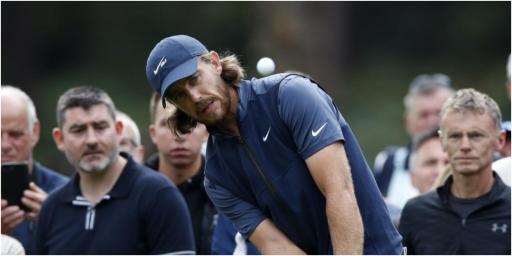 Tommy Fleetwood moved to within striking distance of the lead going into the final round of the Saudi International.

Fleetwood is only two strokes behind Harold Varner III after 54 holes of play in Jeddah at the Royal Greens Golf & Country Club.

Adri Arnaus, the Spaniard in fine form, shot a third round 69 and trails the surprise leader Varner III by one stroke on the now Asian Tour event.

It is the opening event of the schedule and now their flagship competition with the winner taking home $900,000 of the $5million prize purse.

Australia's Cameron Smith as well as former world number one Dustin Johnson, who has won this tournament twice before, are by no means out of it but will need to go low in their final 18.

Largely, this week has been less about the golf and more about the politics of the event. Previously, this tournament was played on the European Tour.

Now it is under the umbrella of the Asian Tour and there has been much chatter about a proposed breakaway league spearheaded by Greg Norman, funded by the sovereign wealth of the Kingdom of Saudi Arabia.

Bryson DeChambeau was reported to have been offered $135million to be the poster boy of this concept. He denied this. Phil Mickelson also ruffled feathers.

But on Saturday it appeared that a golf tournament broke out amidst all of the controversy of human rights, greed and growing the game.

Varner III carded a third round 2-under 68 to complement his other good rounds of 64 and 66. He made three bogeys, three birdies and an eagle in an entertaining third round.

He has one win on the European Tour, which came in 2017. The 31-year-old is yet to win on the PGA Tour and should he win tomorrow it would undoubtedly be the biggest win of his career.

You heard that right. A 14-year-old amateur is playing in this event and he's even beating the pros. His name is Ratchanon Chantananuwat and he shot 69 and 71 to make the cut mark on level par.

Paul Casey said of the phenom: "His physical skills are phenomenal for a 14-year-old. But he's going to get bigger and stronger and all the rest of it.

"So he's not crushing the ball yet. He has all the shots you can imagin - and more.

"And he's got great course management, which is amazing for a 14-year old. He plots his way round. But the biggest thing he has is great emotional control."

After 54 holes he is at 4-over par. But the names of players he has beaten this week include Sam Horsfield, Graeme McDowell and Ross Fisher. His first round was four strokes better than an injured DeChambeau.

Lee Westwood said of the youngster: "He's got a great opportunity if he just doesn't fall into one of the pitfalls you can run into.

"If he just carried on now and just lets himself develop, he'll turn into a very good player. Lovely short game, if it's hit far enough."

Related: Bryson DeChambeau fell over and injured himself