Rasmus Hojgaard was in the native area on the par-5 14th hole and wanted to go for the green. He passed the test but it wasn't with flying colours. 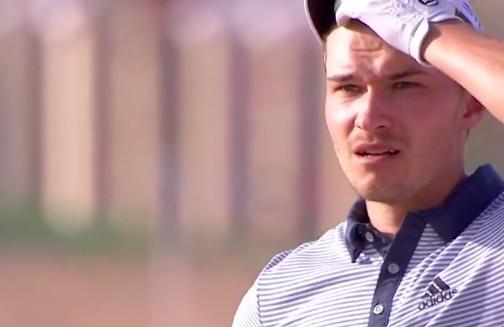 Rasmus Hojgaard was thanking his lucky stars when he walked off the 14th hole on day one of the Ras al Khaimah Championship.

On this 582-yard par-5, Hojgaard's drive found the native area to the left of the hole at Al Hamra Golf Club. Nonetheless, he pulled an iron out of his bag and aimed at the green.

He had 242 yards left to the green and in true club golfer style, he topped his shot low and essentially across the floor. But his ball kept rolling.

It nestled about 10 feet from the hole and the young Dane had a fantastic opportunity for an eagle. He put his hand on his forehead in complete disbelief at the outcome.

"Yeah, I don't really know. I was in between two clubs and I went with the club that I had to hit a little harder and I didn't quite time it," Hojgaard said after his first round.

Rasmus Højgaard tops his approach from 242yds and puts it to 10ft #RakGolfChamps pic.twitter.com/4AZIgCyLkn

"It came out a little low from the face and it trickled all the way up to about 10 feet for eagle. That was a bit crazy."

The 20-year-old didn't actually convert the eagle but made a safe birdie. This contributed to his 3-under-par 69 to begin the week well in the Middle East.

Hojgaard followed this up with a solid 68 on Friday in his second round. As it currently stands, he sits on 7-under-par and seven shots behind Scotsman David Law.

Law fired a 64 in his second round to race into the 36-hole lead and he also tied the course record. There are still many players to finish their second rounds.

Rasmus' brother Nicolai Hojgaard shot a 67 on day one at the Ras al Khaimah Championship. Nicolai won the Italian Open in 2021 which was his first win on the DP World Tour.

NEXT PAGE: PGA TOUR: HOW MUCH IS SIX-TIME MAJOR CHAMPION PHIL MICKELSON WORTH IN 2022?