WATCH: Has Thomas Bjørn already locked up the LUCKIEST shot of the year?!

Thomas Bjørn knifed this bunker shot then converted the par. And he found it absolutely hilarious. 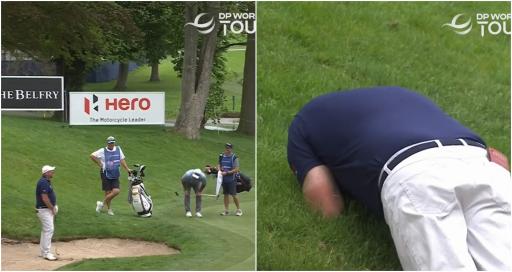 He's simply very, very good at golf and is known for his delicate touch, especially around the greens.

Though during his first round at The Belfry on Thursday at the British Masters, Bjørn made par in the most hilarious way possible.

He made the turn at 2-under par and found himself facing a particularly treacherous shot from the sand at the par-4 10th.

Water looming in the background, getting it close was somewhat a tricky task.

What happened next was something we're sure he's probably never done in a professional tournament.

He absolute knifed his golf ball straight into the face of the bunker before it perfectly trickled towards the hole.

And Bjørn had an all-time reaction to. He duly lapped up the applause from the crowd before falling to the ground.

There was even a celebratory club toss. Bjørn then converted the par. Amazing.

After 36 holes, it was Germany's Hurly Long who held the lead by one stroke at 9-under par.

He was being chased by Denmark's Thorbjorn Olesen, Sweden's Marcus Kinhult and Scotland's Richie Ramsey.