It was another disappointing week for Eddie Pepperell on the European Tour, but he reminded us all again of why we love him. 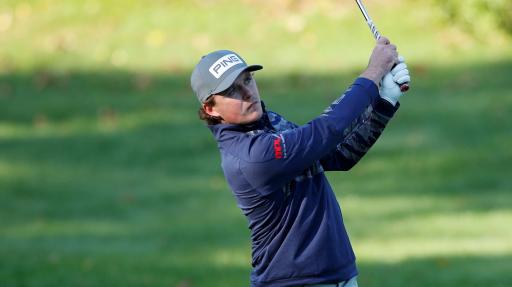 Eddie Pepperell finished tied 40th at the Mallorca Golf Open, but as we see by his posts on social media, he always keeps a smile on his face.

Pepperell has only managed to place in the top-20 three times in 2021 on the European Tour, which is unusual for a consistent and impressive player.

He is a two-time European Tour winner and has grown in popularity due to his outgoing personality and fearless attitude to his Twitter account.

After the conclusion of the Mallorca Golf Open, the European Tour posted a video of the big-hitting Wilco Nienaber crunching a drive down the middle of the fairway.

Why do you guys never show my 245 yard necky cut when promoting this stuff?

With his unorthodox swing, Nienaber is one of the biggest hitters in world golf and it is always great to see the European Tour tweet footage of his low, piercing tee shots.

When Pepperell saw this video, he replied in the only way he knows how: "Why do you guys never show my 245-yard necky cut when promoting this stuff?"

The Englishman is the king of self-deprecation and if there's anyone who can make light of tough situations, then it is Pepperell.

The 30-year-old also tweeted to congratulate Jeff Winther on winning his first European Tour event at Golf Santa Ponsa, who one by one shot from Jorge Campillo, Sebastian Soderberg and Pep Angles.

Really pleased for Jeff Winther winning this week in Mallorca. Great guy with a tremendous sense of humour. Which is a good job when you look like him.

He also did this in true Pepperell style: "Really pleased for Jeff Winther winning this week in Mallorca. Great guy with a tremendous sense of humour. Which is a good job when you look like him."

It was all tongue-in-cheek and Pepperell reassured his fans that it was a personal joke. If you don't already follow Eddie Pepperell on Twitter, what have you been doing?

It is always worth keeping tabs on his feed just in case he comes out with more gold, which he usually produces on a weekly basis.

NEXT PAGE: NIGERIA'S "NEXT TIGER WOODS" WINS GOLF EVENT YET AGAIN, AND SO DOES HIS SISTER!