Golf Betting Tips: Another day in the sun for Richard Bland at The Belfry?

Richard Bland is returning to the Betfred British Masters as the defending champion after beating Guido Migliozzi in a playoff at The Belfry in 2021. 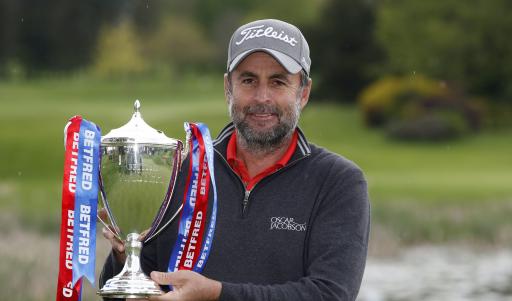 GolfMagic enjoyed another successful week on the betting front at the Mexico Open as Jon Rahm stormed to victory in Vidanta Vallarta. It was the Spaniard's seventh win on the PGA Tour and this week, it is the turn of the Betfred British Masters to take centre stage on the DP World Tour.

Richard Bland is doing something he has never done before in his career at The Belfry this week. He will return to a DP World Tour event as the defending champion.

Bland won his first DP World Tour title at the age of 48 at the famous venue in 2021, beating young Italian Guido Migliozzi in a playoff.

Former Masters champion Danny Willett is hosting the event this week which features a great line-up of players such as Lee Westwood, Bob McIntyre, Sam Horsfield and of course, Bland and Willett.

The Betfred British Masters has become one of the most popular events on the DP World Tour. The tournament wasn't played from 2009 to 2014 due to a lack of sponsorship.

Matt and Andy are back with two selections each for the Betfred British Masters:

Related: Jon Rahm back in winner's circle with victory at Mexico Open on PGA Tour

Bland is currently enjoying the best time of his career. In 2022, he has reached the last 16 of the WGC Match Play at Austin Country Club and he lost in a playoff to Viktor Hovland at the Slync.io Dubai Desert Classic.

The Englishman also finished in the top 30 at the Valero Texas Open. He has found the game to compete with the best players in the world and 33/1 is a hugely generous price.

Oliver Bekker came second at the Catalunya Championship last week and he was on the cusp of winning for the first time on the DP World Tour when he came tied third at the Steyn City Championship as well.

The South African is ranked fourth in stroke average and 19th in putts per green in regulation, so this is why he has been finishing strongly in 2022.

Laurie Canter achieved four top-five finishes on the DP World Tour in 2021 and he came tied third at the Catalunya Championship last week. It is a wonder how he hasn't won on the circuit yet.

The Englishman is ranked 17th in driving distance and 32nd in greens in regulation, so his game is shaping well to compete at The Belfry.

The man from New Zealand is ranked in the top 30 for stroke average, driving distance and putts per green in regulation. He should certainly challenge in Sutton Coldfield this week.