Guido Migliozzi captured his third victory on the DP World Tour with a stunning 62 on Sunday at Le Golf National in Saint-Quentin-en-Yvelines. 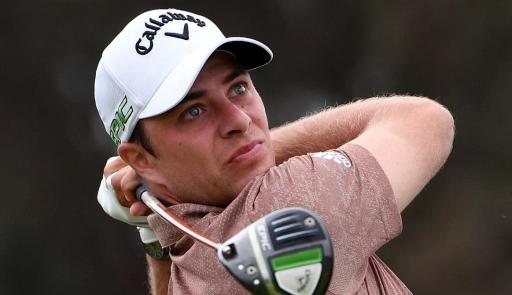 Guido Migliozzi produced an incredible 62 in the final round of the Cazoo Open de France, capped off by a stunning birdie on the 72nd hole, to secure his third DP World Tour win.

The talented Italian was level with Rasmus Hojgaard in the middle of the 18th fairway, before producing a cut shot that rolled inches from the hole to six feet.

The 25-year-old's approach to this famous hole typified a round in which he made nine birdies and no bogeys to come from five shots behind Hojgaard at the start of the day. He won by one shot from the Dane.

On the 10th hole, Migliozzi made his fifth consecutive birdie to reach 12-under-par. At this stage, he was two shots behind Hojgaard and one shot behind George Coetzee.

He hit the front for the first time on the par-5 14th hole with another 20-foot birdie putt. He made his eighth birdie in 10 holes on the 15th to take the lead on his own on 15-under-par.

He hits this shot into 18 as he looks to post -16. #CazooOpenDeFrance pic.twitter.com/ifos4jTocz

Hojgaard, who made a quintuple-bogey on the 2nd hole on Saturday while in a six-shot lead, replied with a birdie on 14. However, Coetzee made a damaging triple-bogey on 15.

Migliozzi stepped up on 18 and hit what Sky Sports commentator Mark Roe described as "one of the best shots he'd ever seen on the DP World Tour."

His ninth birdie was enough to secure his first win since the Belgian Knockout in 2019. He is projected to rise 79 places to 21st in the DP World Tour Rankings.

"An explosion of feeling. It's been an incredible day, I played very, very solid today and - I was very comfortable with my game. It was one of those days," Migliozzi said.

"I love to play golf and I love to battle on the golf course and today, I received something back from the golf (course). I just kept going hole by hole, I wasn't nervous. I was just enjoying my game and it was a beautiful day of golf. It's been great."

After coming tied 34th at the DS Automobiles Italian Open last week, he has made the perfect start to his Ryder Cup qualification campaign which will be played in 2023 at Marco Simone in Italy.