Rasmus Hojgaard saw his six-stroke lead evaporate in a matter of minutes at the Open de France on the DP World Tour at Le Golf National. 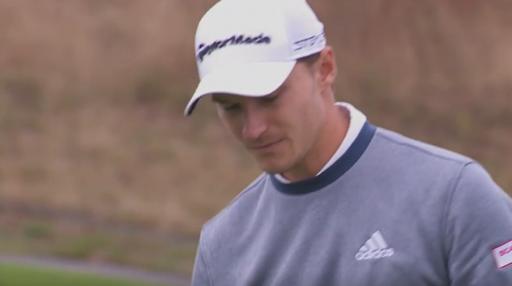 We have seen some bizarre things at this week's Open de France on the DP World Tour, but Rasmus Hojgaard may have just provided the highlight.

The 21-year-old Dane is searching for his fourth win on the circuit and managed to forge himself a six-shot lead at the halfway stage after firing 10 birdies in the first round on his way to an opening 62 at Le Golf National.

He followed that with a stunning 65 to open up a considerable gap over Alexander Björk. A win at this stage seemed an absolute formality.

Until this happened. Perhaps he just wanted to give the rest of the field some hope?!

Shot tracker kinda says it all:

This was an absolutely brutal watch. Hojgaard's struggles happened on the par-3 second hole. At only 146 yards, it doesn't provide the most daunting prospect.

But Hojgaard dunked not one, not two, but three balls into the water! Grim.

His six-stroke lead evaporated in a matter of minutes. And it could have been worse, his putt for a quintuple bogey 8 was from all of 14ft.

TAKE A LOOK - click the right arrow to watch what happened:

Hojgaard compounded his early error in the third round with another bogey at the par-5 third hole.

But you can forgive him. His head would have certainly been a bit scrambled after playing the hole like a hopeless hack in a Sunday medal.

Hojgaard, however, kept his composure thereafter and went on to sign a respectable 74, albeit making bogey down the last.

He will take a narrow one-shot lead over South Africa's George Coetzee into the final round.

Earlier in the week, DP World Tour pro Thomas Pieters provided one of the strangest moments we have witnessed in quite some time.

He accidentally hit his putt when a child coughed during his back swing. He was allowed to replace the ball without penalty, but it was later confirmed that it should have been docked two strokes.

Pieters called himself "a lucky idiot".

This bizarre exchange also followed this hilarious moment where a marshal took a tumble trying to get up after having a dead leg.

Pieters finds himself just two shots off the pace heading into the final round after carding a brilliant 66 on Saturday.

Patrick Reed endured another unhappy week at Le Golf National as he missed the halfway cut.