After Nottingham Forest beat Arsenal in the third round of the FA Cup, Lee Westwood was very smug and picked up a wager from his friend Ian Poulter. 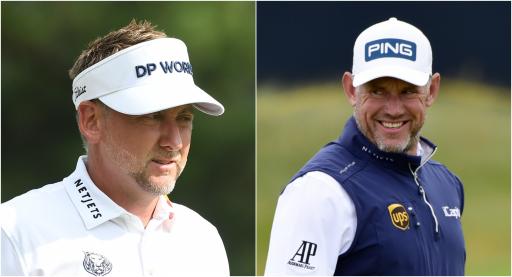 Golf is not the only sport on the mind of the world's top players. If you ask Ian Poulter and Lee Westwood, they'd say football is one of their main passions in life.

Unfortunately for Poulter, he was on the end of a rather embarrassing result at the start of January. Not only did it hurt his pride, but it also hurt his wallet as well.

After Lewis Grabban scored a dramatic winner for Nottingham Forest against Arsenal in the third round of the FA Cup, Westwood was ecstatic.

Ironically, this was the second time that Forest had beaten the Gunners in the FA Cup in four years. They beat the London club 4-2 in 2018.

That evening of Sunday, January 9, Westwood tweeted to ask if anyone had checked on his fellow Englishman Poulter, who is a big Arsenal fan.

It would appear that the gloating hasn't finished yet as the pair got together in Abu Dhabi ahead of this week's Abu Dhabi HSBC Championship at Yas Links.

In a video above posted on Westwood's Twitter page, Poulter is seen handing over a $100 note in the grasp of a particularly offensive hand gesture.

"I do not feel like we've discussed Nottingham Forest vs Arsenal," said the 48-year-old who is looking for his 26th win on the DP World Tour this week in the UAE.

RELATED: HOW DID TIGER WOODS EXPLAIN HIS SPLIT WITH WIFE ELIN NORDEGREN TO HIS KIDS?

Westwood is set to tee it up with Rory McIlroy and defending champion Tyrrell Hatton in the first two rounds on Thursday and Friday, while Poulter is playing with Shane Lowry and Rasmus Hojgaard.

Westwood won the Abu Dhabi HSBC Championship in 2020 and he will be looking to secure the third Rolex Series victory of his career.