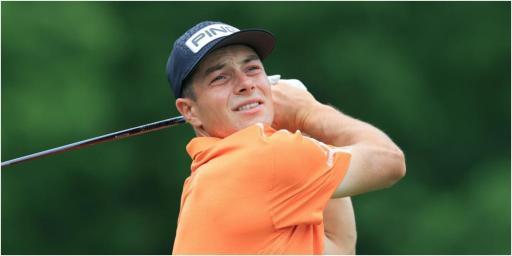 Viktor Hovland is making a welcome appearance on the European Tour DP World Tour in Abu Dhabi this week, and he has already made a big impression prior to even reaching the first tee at Yas Links this week.

Hovland, 24, took to the range with a pair of black socks (which will come onto shortly) and some rather eye-catching calves that even Phil Mickelson would be proud to be showing off to the masses.

"Phil Mickelson will love those calves," commented one golf fan.

"That boy thicc!!" wrote another.

"He must have hit that ball like 450 yards," replied another.

Golf fans were also quick to comment on Hovland's choice of black socks in the DP World Tour's post.

Now you might think what is all the fuss about a pair of black socks, but actually you would be wrong as one golfer recently got kicked out of his golf club for wearing a pair of them.

"Interesting pair of socks," said another.

"Need to get this dude some better socks," wrote one fan.

"JL need to sort Viktor with some socks," said one fan.

Despite his superb end-of-season form in 2021, Hovland fell out the gates in his first tournament of the season when finishing tied 30th alongside Mickelson in a 38-man field at the Tournament of Champions.

Hovland starts as the third favourite this week as he looks to capture his second DP World Tour title having won the 2021 BMW International Open.

NEXT PAGE: PHIL MICKELSON WEIGHS IN ON THE DEBATE ABOUT BLACK SOCKS AT GOLF CLUBS