Carolina Melgrati moves into a four-way tie for the lead on day one of the co-sanctioned DP World Tour and LPGA Tour event. 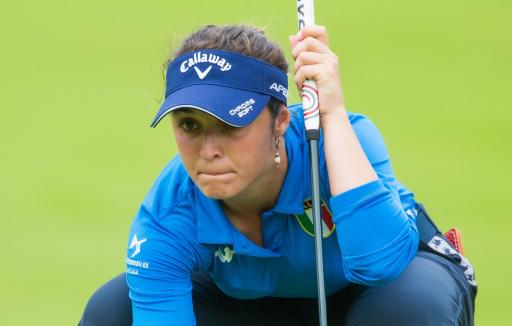 Italian amateur Carolina Melgrati produced a spectacular opening round of 65 (7-under par) on the first day of the Volvo Car Scandinavian Mixed to be in a four-way share of the lead.

The Volvo Car Scandinavian Mixed is a co-sanctioned event between the LET and DP World Tour and it sees 78 men and 78 women playing for the same prize fund of US $2 million and one trophy with Henrik Stenson and Annika Sörenstam as hosts.

And despite a dropped shot on the eighth, the Italian more than made up for it on the back nine rolling in four birdies and one eagle to be seven-under-par and in the co-lead after the first day.

“It is probably a result of working hard and it is paying off. I’m just trying to focus on hitting fairways and hitting greens and then making putts,” she said. “When it works it’s great, when it doesn’t you just have to go back and practise it some more.

“It is crazy! It is so great. As soon as I got the invitation, I said yes, I’m playing because it is great to compete with professional golfers. It is amazing and that is also my dream, so it is coming true.”

Melgrati is joined at the top of the leaderboard by Scotland’s Craig Howie, France’s Matthieu Pavon and Spain’s Santiago Tarrio, who all carded rounds of 65 too.

“Really pleased, I played nicely, quite solid. It was difficult to know how the scoring would be this week, so I was just kind of freeing it up and going,” said Howie, who didn’t drop a shot all day.

“It is a different style of golf that we play from the women, but I do think this golf course is a perfect mix for both and I think it sets up well for us and the women, so I think in terms of venue there couldn’t really be a better venue for fairness.”

Four players are tied for fifth place including England’s Liz Young and Sweden’s Linn Grant after they both fired rounds of 66 (-6).

Despite making a bogey on the first, Young bounced back immediately with a birdie on the second and then the fifth.

A dropped shot on the seventh was soon forgotten with birdies on eight and nine, before she rolled in four more on the back nine.

“I’m very happy. It was not great starting with a bogey with a three-putt, but then the putter got hot and that really got my round going in the middle as well, which was good,” she said.

“I was still trying to make birdies on the back nine, we have a few more wedges coming into greens, and I managed to capitalise on that. On the front nine, especially seven, eight and nine are tricky holes and I came through there with a couple of birdies which started the game going.

“This is a great event, it is great playing with the guys and testing yourself, I’ll take one shot at a time as there is a long way to go.”

Grant rolled in three birdies and two bogeys on the front nine, but then sunk six birdies on the back nine to move herself into contention once again.

“I got it going, I holed some important putts today for pars and birdies and I just kept on going,” explained the two-time LET winner.

“Playing at home, I have enjoyed the week so far and I hope to enjoy the next round and playing with Annika again tomorrow will be nice. I didn’t pick her brain because I know a lot of people ask her questions, so I tried to give her space and I’m super into what I’m doing as well.”

Young and Grant are joined by Sweden’s Kristoffer Broberg and Thailand’s Jazz Janewattananond on six-under-par.

Two players sit one shot further back with LET winner Manon De Roey and Denmark’s Niklas Norgaard Moller both on five-under-par to round out the top ten.

And De Roey, who won on the LET for the first-time last month, managed to take her birdies chances when they came and is confident with where her game is at.

“Today was pretty good, my tee shots were okay and most of them were in the fairway,” said the Belgian.

“My tee shots on the par-threes were not so good, I didn’t hit one green, but I made up and downs. When I had a birdie chance, I birdied it. Overall, I’m very happy about my game today. I feel confident, so I’m just going to keep on going.”