John Catlin beat Max Kieffer on the fifth playoff hole at the Austrian Open after Kieffer made a quintuple-bogey on the final hole. 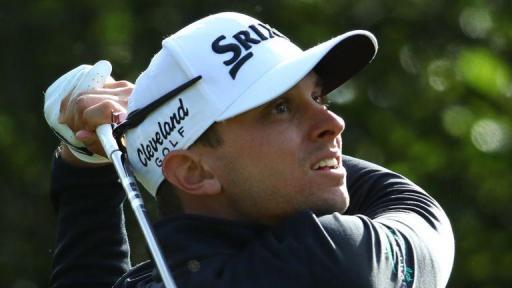 John Catlin sealed his third European Tour title at the Austrian Open after an incredible five-hole playoff with Max Kieffer.

Both players played superb golf during the final round at the Diamond Country Club. Catlin shot a 7-under-par 65 and Kieffer carded a 6-under-par 66 to finish on 14-under-par for the tournament, three shots ahead of two-time major champion Martin Kaymer.

In a tense end to the day, the players returned to the par-3 18th hole for the playoff and each of them made par on the first two visits.

Kieffer, 30, thought he had won the tournament when he holed a long birdie putt on the third playoff hole, but Catlin responded with a great birdie putt of his own to extend proceedings.

Catlin had a big stroke of luck on the fourth playoff hole when the American's tee shot hit a wooden sleeper and finished in a greenside bunker. Incredibly, he saved par and he took his German opponent back to the tee for the fifth time.

Unfortunately for Kieffer, the tournament was to end here when he found the water with his tee shot and did so again twice more, making a quintuple-bogey and handing the Austrian Open title to Catlin.

The 30-year-old American made a bogey on the final playoff hole but it was enough to seal victory in what was a fantastic battle with Kieffer.

Catlin has become a consistent force on the European Tour, with all of his wins coming inside the last 12 months.

The World No. 79 won the Estrella Damm N.A. Andalucia Masters last September and followed this up with a victory at the Dubai Duty Free Irish Open in the same month.

NEXT PAGE: GOLFERS SLAMMED BY CLUBS FOR NOT REPAIRING PITCH MARKS