The Northern Irishman once worked in a golf store while trying to make it as a professional player, but now he was won his first European Tour title. 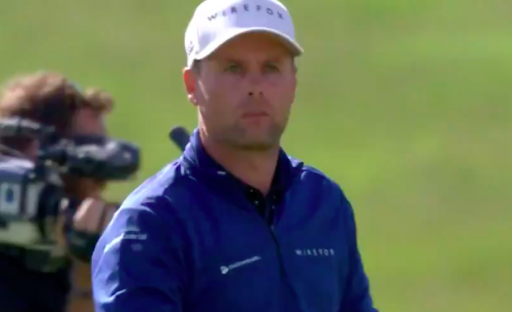 The Northern Irishman produced a stunning birdie at the final hole in Sweden to overcome the challenges of Adrian Otaegui and Alice Hewson.

It was a fitting end to the co-sanctioned European Tour and Ladies European Tour event as Hewson had an opportunity coming down the stretch to force a playoff with Caldwell.

"The best shot of his life"

The 37-year-old Caldwell had set the clubhouse lead on 17-under-par after equalling the best round of the week of 8-under-par, which was rounded off with a remarkable second shot from the rough for a tap-in closing birdie.

Spain's Otaegui had an opportunity to clinch the title at the death after giving himself a birdie chance at the 72nd hole for an 18-under-par total, but unfortunately, he three-putted.

Hewson, the last person standing to force extra holes, made a par on the last hole to shoot 3-under-par to finish as the highest-placed Ladies European Tour in third place behind Otaegui second.

Caldwell now has a life-changing victory having struggled to make his mark on the professional game for 13 years, while at times working part-time in a golf store.

"My immediate feelings are probably a bit of disbelief if I'm honest, it's been a dream of mine for quite a long time obviously," said Caldwell.

"A lot of hard work goes into it so it hasn't quite sunk in yet but hopefully more to come. In 2009 I played my first year, lost my card, played mini-tours and Challenge Tour down the years, worked as well in a local golf store so it's been a long road. But finally, I'm here."