Tiger Woods appeared to be in good spirits on the range ahead of the JP McManus Pro-Am at Adare Manor. 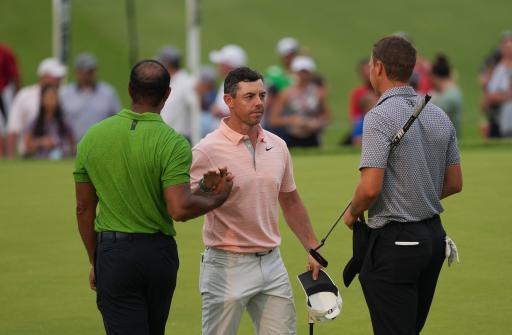 Tiger Woods appeared to be in good spirits on the range ahead of the JP McManus Pro-Am at Adare Manor.

Woods, 46, arrived in style earlier in the week alongside his long-time girlfriend Erica Herman via helicopter.

He is playing the star-studded event in a tune-up before the landmark 150th Open at St. Andrews, a tournament that he has won twice at the home of golf.

Woods previously won this event in the year 2000 when it was held at Limerick Golf Club. The tournament this year is being played over two days.

Related: Jordan Spieth DISQUALIFIED during the first round of the JP McManus Pro-Am

He was playing alongside Michael Smurfit Jnr, Tony Smurfit Jnr and Sharon Smurfit.

He has been rocking the Premiere Series Packards ever since he returned to major championship golf at the 86th Masters in April at Augusta National.

Of course, the stability that they provide is a key factor for Woods, who admits that his range of motion is now limited after his right leg had to be surgically repaired following his car crash in February 2021.

"Too much loft for you?"

Woods caught up with Rory McIlroy on the range where the Northern Irishman decided to test out his driver.

“Too much loft for you?” asks Woods.

Ten of the world’s 11 top-ranked golfers have committed to the JP McManus Pro-Am, which moved to Adare Manor in 2005.

Woods was also spotted having a conversation on the range with Leona Maguire, who earlier in the season became the first Irish woman to win on the LPGA Tour.

Woods had his long-time pal Rob McNamara on carrying duties for the JP McManus Pro-Am.

It was reported that his usual caddie Joey LaCava will take over closer to The Open.