Jordan Spieth was convinced his caddie Michael Greller had given him the wrong club on the par-3 6th hole, but he was pleasantly surprised at the outcome of his shot. 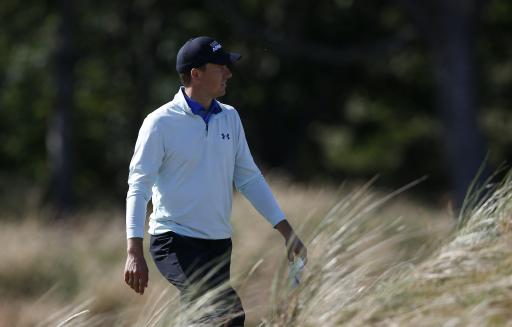 During the second round of the Genesis Scottish Open, Jordan Spieth's debacle on the par-3 6th hole shows the value of having a world-class caddie.

Spieth and his caddie Michael Greller have reached the top of the game together, winning three major titles and spending 26 weeks as World No.1.

Their vocal and honest relationship is often documented in footage each week on the PGA Tour and they shared a classic moment together on Friday in North Berwick.

The 6th hole is only 114 yards long and Greller gave Spieth a club that the 13-time tour winner didn't think would get near the green.

"Is this even getting within 10 yards of the green? You think it does?" Spieth said in disbelief to his carrier. "Yeah, I still like that. If it ends up, you know, 100 that's good," Greller replied.

"I mean it's just not even remotely close to getting 90 yards - Oh my god, it did!" One second of doubt turned into one second of complete shock for the American.

His ball dropped down nine feet from the pin. Spieth walked back over to Greller still in awe, but with his tail between his legs. Unfortunately, he went on to make a par.

It was a frustrating round for the 28-year-old who made four bogeys on his way to a 72. He is on level-par for the week and seven shots behind Cameron Tringale.

As much as Spieth would enjoy picking up another career win, the Genesis Scottish Open is a chance for players to put in final preparation for The 150th Open Championship next week.

Spieth won The Open in 2017 and he also came tied fourth when it was last hosted at St Andrews in 2015.