Max Homa and Justin Thomas appeared to enjoy an hilarious dinner after the first round of the Genesis Scottish Open. 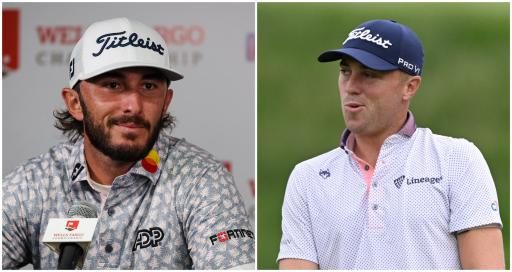 PGA Tour pros Justin Thomas and Max Homa appeared to enjoy an hilarious dinner after playing the first round of the Genesis Scottish Open at The Renaissance Club.

Homa, 31, and his wife Lacey Croom went out for a bite to eat with outspoken PGA Tour defender Thomas and his father and coach Mike after their rounds in East Lothian.

If you didn’t know, Homa recently announced that he and his wife will soon be parents. They announced earlier in the year they are expecting a boy with this gender reveal video.

JT’s dad Mike asked “what they were having” while they were on the way to the restaurant. And that’s where things got amusing. “I said boy,” Homa said. “My wife said pasta.”

“She’s gunna be an amazing mom,” the four-time PGA Tour winner added. Thomas also bet that his father would have pizza, spaghetti or meatballs with a light beer or two. “So predictable.”

At dinner tonight we were looking over the menu while talking to @JustinThomas34’s parents about our child on the way. His dad asked us what we were having. While I said boy, my wife said pasta. She’s gunna be an amazing mom

I also bet my dad had pizza, or spaghetti and meatballs with a light beer or two. He’s predictable

Idk if I’ve ever seen him eat haha

Both Homa and Thomas have been outspoken in recent weeks and months as golf’s civil war escalates between the PGA Tour, LIV Golf and the DP World Tour.

Homa rushed to the defence of Rory McIlroy, who has urged peace talks, likening the Northern Irishman to the Batman character Harvey Dent. “I feel bad for him,” Homa said.

Thomas, too, has also spoken about how he feels there a feeling of betrayal if the LIV Golf defectors were to litigate against the PGA Tour. “They are not just suing the Tour, they are suing me,” he said.