Max Homa scraped into the cut on Friday at The Renaissance Club, but he wasn't done there so he took a trip to North Berwick Golf Club... 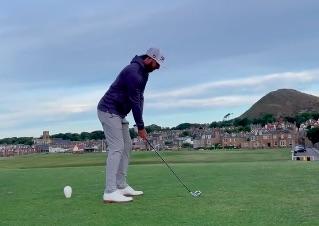 Max Homa is one of the many PGA Tour players to embrace the links masterpieces of Scotland and Ireland this month, touring each country and absorbing as much knowledge as possible.

It's fair to say Homa has struggled in the first two rounds of the Genesis Scottish Open, carding a 71 on each day to creep into the cut on 2-over-par.

He will begin the third round nine shots behind fellow American Cameron Tringale, so the 31-year-old set about putting his game right and getting some more practice in.

On Friday evening, Homa was filmed teeing it up at North Berwick Golf Club which is just over four miles from this week's venue for the PGA Tour/DP World Tour co-sanctioned event.

I never do this but I couldn’t pass up a round at North Berwick. Ever since I saw the @NoLayingUp vid years ago I knew it was special. Lives up to the hype! https://t.co/a7lA2aWllZ

"I never do this but I couldn’t pass up a round at North Berwick. Ever since I saw the @NoLayingUp vid years ago I knew it was special. Lives up to the hype!" Homa tweeted on Friday night.

The four-time PGA Tour winner clearly enjoys playing links golf, a form of the game which isn't readily available in the United States.

Before and after the JP McManus Pro-Am which was played earlier this week, we have seen many players visit courses around Ireland as well in an attempt to prepare for The 150th Open Championship.

Tiger Woods and Rory McIlroy also visited Ballybunion together and footage emerged of the major champions putting in their final pieces of work before the landmark tournament at St Andrews next week.