Cameron Tringale carded a 2-over-par 72 on Friday at The Renaissance Club to keep a strong lead heading into the weekend at the Genesis Scottish Open. 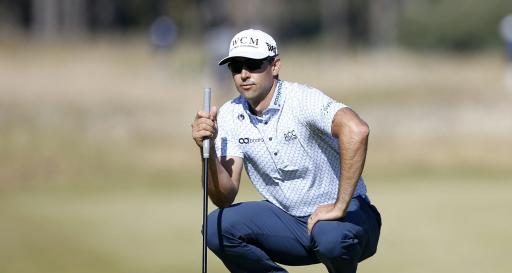 Cameron Tringale couldn't produce his first-round brilliance on Friday at the Genesis Scottish Open, but his round of 72 was enough to keep a three-shot lead on 7-under-par heading into the weekend.

Tringale teed off late in the day on the 10th hole and he started in great fashion with birdies on the 11th and 12th holes. He reached 11-under-par and at one point, he opened up a five-shot lead.

However, his next six holes were far more difficult. He made consecutive birdies on holes 16, 17, 18 and the 1st hole to fall back to 7-under-par for the event.

Despite making his first serious mistakes of the week in East Lothian, he still maintained a three-shot lead over fellow American Doug Ghim and Gary Woodland. Ghim is aiming to secure one of the final spots at The 150th Open Championship.

Woodland fought back after a difficult start to his round. He made four bogeys in the space of five holes on his front nine and he added another one on the 1st hole to drop back to 2-under-par.

The former US Open champion carded a 72 to finish on 4-under-par for the week. He is in second place and in good shape to win for the first time since his maiden major title at Pebble Beach in 2019.

Xander Schauffele and Matt Fitzpatrick posted superb scores early on Friday of 65 and 66 to creep up the leaderboard. Both players finished on 3-under-par to sit just four shots behind Tringale.

This is Fitzpatrick's first competitive appearance since winning the US Open at The Country Club in Brookline and he is on course to make his ninth top-10 in 16 events.

As for Schauffele, he won the JP McManus Pro-Am in the week at Adare Manor and he also arrived in North Berwick off the back of winning the Travelers Championship.

Fowler, ranked 150th in the world, is playing for his second Scottish Open title but he is also playing for a place at The Open Championship at St Andrews next week.

Next Page: Most UNDERRATED driver of 2022? Honma TW-757-S driver review