Justin Thomas was pictured in a RLX shirt on Monday. Then he removed it for Tuesday. 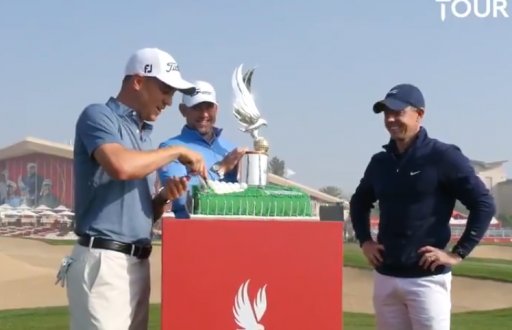 PGA Tour star Justin Thomas was spotted wearing a Ralph Lauren polo shirt when he rocked up at Abu Dhabi Golf Club on Monday, but he was then pictured on Tuesday with an unbranded shirt on display.

Thomas, 27, was dropped by Ralph Lauren for using a homophobic slur when missing a putt at the Tournament of Champions on the PGA Tour two weeks ago - WATCH HERE

The American turned up on Monday still wearing RLX apparel ahead of this week's Abu Dhabi HSBC Championship on the European Tour, but then there was no sign of the brand on Tuesday... as you can see from this image posted below by Golf Magazin:

RELATED: "Justin Thomas only has himself to blame for losing Ralph Lauren"

Westwood then responded to the video by posting "caption this", and judging by the responses, plenty of golf fans were still not quite ready to drop the whole Ralph Lauren issue just yet.

Here's a look at some of the tweets:

"Wonder what Justin Thomas is doing with all his golf shirts that have Ralph Lauren logo?"

"You don’t need Polo! Just threw out all my golf shirts. You made a mistake and owned up. So much for Polo. Just lost my business forever!"

"If I were Justin Thomas I would wear Ashworth shirts with sleeves past my elbows until I get a new deal. Nothing controversial about this dad look."

"It took years for Ralph Lauren to finally fit JT properly. JT was always adjusting the shirt on his shoulders but he stayed loyal even when I thought their clothes made him look shabby. They only recently started to do right by JT and now this. Ralph Lauren."

"Only a matter of weeks before the swoosh is on his shirt."