Kevin Na wears a pretty unique logo on his polo shirt that had everyone talking during Sunday's final round of the Sony Open. 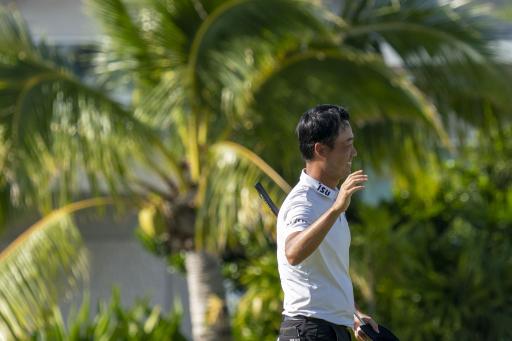 Professional athletes having their own logo has been a common theme for years, with the likes of tennis superstar Roger Federer and golf's Tiger Woods having instantly recognisable logos that they have earned the right to show off. Usually, athletes use a blend of their initials in some kind of cool shape or concept, but Kevin Na on the other hand, has gone one step further.

The master of the walk-in putt claimed his fifth PGA Tour title on Sunday at the Sony Open, after he birdied four of his final six holes to finish the tournament 21-under par, one stroke better than Chris Kirk and 22-year-old Joaquin Niemann.

WATCH: Kevin Na stripes a 3-WOOD off of the CART PATH during Sony Open final round!

Na has now won at least once in the last four seasons on the PGA Tour, an accomplishment shared only with Masters champion Dustin Johnson and reigning US Open winner Bryson DeChambeau.

Unlike many of the players on the PGA Tour, Na doesn't wear Nike or adidas apparel, but a high-end South Korean golf and athletic clothing brand called 'WAAC', which stands for 'Win At All Costs'.

The mascot for the brand is a little devil named Waacky and the brand's range is pretty cool, but be warned, when we say high-end we mean it, their garments are far from cheap.

What caught the eye of golf fans during Sunday's round was the logo on the back of Na's polo shirt, which is a print of the 37-year-old walking in a putt before it's even dropped, something he's become famous for on the PGA Tour.

Golf fans all had their say on Twitter last night, including a couple of professional golfers too, in English stars Eddie Pepperell and Lee Westwood.

i would like to remind you that Kevin Na wears a logo of Kevin Na walking in putts pic.twitter.com/mKVlTy9O6M

Have you not seen mine? pic.twitter.com/vnzps51sjW

Is this not more appropriate? pic.twitter.com/z0YqD7Kbmj

Could this be the best troll of Phil we’ve ever seen? He’s been wearing himself as a logo for years pic.twitter.com/YdWG2rkayJ

Not much chance his clothing sponsor will dump him if says a bad word. So he’s got that going for him. Which is nice.

It’s not bragging if you can do it.

NEXT PAGE: How Much They All Won At The Sony Open On The PGA Tour