Sweden's Linn Grant became the first woman to win on the DP World Tour at the 2022 Volvo Car Scandinavian Mixed. 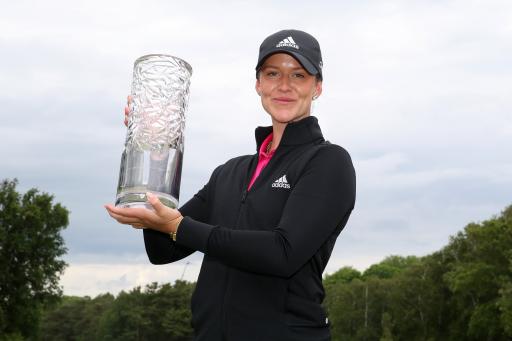 Sweden’s Linn Grant became the first woman to win on the DP World Tour after cruising to victory at the 2022 Volvo Car Scandinavian Mixed.

The 22-year-old Swede fired a bogey-free 6-under 66 on Saturday to take a two-stroke lead going into the final round.

By the time she strolled up the 18th fairway at Halmstad Golf Club on Sunday afternoon she had stretched that lead to nine shots.

Grant has won twice on the Ladies European Tour before. Those victories came at the Belgian Ladies Open which she won last month and the Joburg Ladies Open in March.

By day’s end her nearest challengers were Scotland’s Marc Warren and Henrik Stenson who finished at 15-under par.

No other female player finished inside the top-10.

Tournament co-host and Ryder Cup Europe captain Stenson made birdie at his 72nd hole to jump into a tie for second with Warren.

Grant’s form this was simply sensational. Before she even pegged it up for her final round, she had already amassed 18 birdies and one eagle. She had only dropped four shots before Sunday.

She got things off to a quick start by making birdie at her first two holes. Three more birdies followed at No. 4, 5 and 6. On the back nine, she was just as impressive.

The moment Linn Grant put herself in the history books #VolvoScandinavianMixed pic.twitter.com/TWGVXNlCpM

Grant made three birdies coming home and cultivated and excellent shot at the 72nd when she tugged her drive left to set up another birdie to cap off the win. She missed the putt for a 63 but an 8-under 64 was more than good enough.

She added that she thinks this shows that men and women can play against each other in this format and that she hoped we were witnessing the birth of another superstar.

Her playing partner in the final round was Australia’s Jason Scrivener, who was chasing his maiden DP World Tour title. He struggled to get anything going and his challenge faded quickly.

Grant described her win as “huge” and “crazy”.

Grant turned professional 10 months ago. “Hopefully this pumps up the women’s game," she added.