Former United States Ryder Cup captain Steve Stricker says he's thought about the LIV Golf Series a lot. This is where he's at... 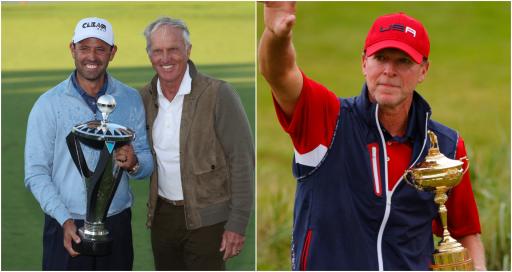 Former United States Ryder Cup captain Steve Stricker is the type of guy in the golf world that when he opens his mouth, people listen.

When the United States romped Europe 19-9 at the most recent Ryder Cup at Whistling Straits, all of the young superstars paid tribute to Stricker such was his influence on the team. He is articulate, calm and level-headed.

At this point we know exactly who is funding the LIV Golf Invitational Series and the players have a clear choice: a mega pay day now and an uncertain playing future or stay on a thriving domestic product on the PGA Tour.

Though for the young guys this presents a problem. It is really, really hard to earn status and retain status on the PGA Tour and there is no guarantee that you will have an injury-free, blossoming career.

"Yeah, it's a crazy time in the world of golf, isn't it?" Stricker told the media at the American Family Insurance Championship, the circuit event he hosts in his home state of Wisconsin.

Then he dived deep:

“Morally, I don't think I could do it, but that's me talking right now when I’m 55, right? If I was in the prime when I was playing well, got offered a crap load of money like they're getting offered, would it be different, and that's hard for me to answer that.

"Personally, morally, right now, I'm not a big fan. It seems, you know, I hate to say it, but it seems a little bit like a member-guest, it really does. It doesn't feel right to me. There's no history there, shotgun starts.

"They're playing for a lot of money and I'm not begrudging the guys that are going over there to play this tour, but for me personally, I'm having a hard time wrapping my head around it.

"I've always — I'm not a Hall of Fame guy, I'm not a guy who won any majors or anything like that, but I played and I was able to compare myself, my time on Tour with the greats of the game and what did they do, you know?

"Right now, there isn't any of that in this LIV tour, it's all about — it's all about money. We all need it, right, and to some degree others need it more than others. Everybody's different.

"Yeah, it seems like it has some momentum. There's some more guys that have come out, so I guess we're just going to have to wait and see how it all shakes out.

"I just don't know if I could throw that all away and go play somewhere else."

Stricker was asked if he would have cashed in when he was struggling.

He lost his PGA Tour card in the early 2000s but fought back.

"Again, I keep trying to put myself in that different kind of position and I don't know what the answer would be, I really don’t.

"We're all in this to make money, it's a business deal, but I also look at the other end of it as the history part of the game.

"I've been a part of something for close to 30 years. I've been fortunate and able to play this great tour. I wouldn't change that for anything.

"I’m glad it didn't come around during the time where I could have been offered an opportunity to go over there.

"I fully support the Tour and what they are about, the charitable dollars.

"I mean, I don't know if there's any charity money going to the first event in the LIV event at all, but I know there is right here and I know there is on a weekly basis out on Tour.