Matt Fitzpatrick's team have told Telegraph Sport that he will NOT be attending the BBC Sports Personality of the Year awards ceremony. 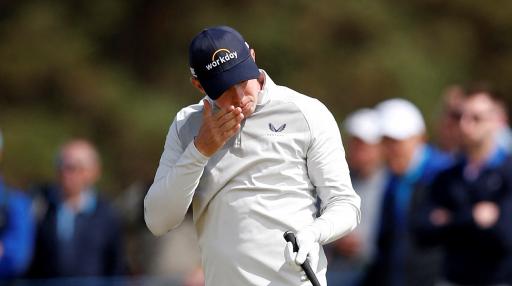 England's Matt Fitzpatrick has reportedly already shunned the BBC's invite to attend their annual Sports Personality of the Year awards, according to Telegraph Sport.

Fitzpatrick, who shares the 36-hole lead with compatriot Tyrrell Hatton in the season-ending DP World Tour Championship, is an outside 150/1 chance to win the coveted BBC SPOTY prize just before Christmas.

But Fitzpatrick, who won his first major title on American soil at the US Open in June and is currently on track to win the DP World Tour Rankings this Sunday, has apparently already declined the invite no matter whether or not he is shorlisted for the main award.

Let's just hope the BBC got his surname right on the invite at least.

The DP World Tour certainly did not today...

You have to go back to 1989 since the last golfer won the BBC Sports Personality of the Year, which likely explains Fitzpatrick's huge price with the bookmakers this year.

Only two golfers have won the BBC prize since its inauguration in 1954.

The first golfer to win it was Wales' Dai Rees in 1957, a year in which he captained Great Britain to their first Ryder Cup success in 24 years in a 7.5-4.5 victory at Lindrick.

Even Rory McIlroy failed to win SPOTY in a year where he won back-to-back major titles in 2014. The Northern Irishman somehow finished second behind Lewis Hamilton.

This year's SPOTY race would already appear to be a done deal too, at least according to the bookies.

England Women's footballer and Euro 2022 Golden Boot winner Beth Mead is currently priced up at 1/4 to win the BBC SPOTY crown for 2022, while England Men's captain Harry Kane is next up at 16/1.

Gareth Bale, like Fitzpatrick, is also priced up at 150/1. But rather more importantly, he has gone against Wales coach Rob Page's orders by making sure golf will be played (in some form) during the World Cup.

Fitzpatrick was presented with Honorary Lifetime Membership of the DP World Tour earlier this week.

Keith Pelley got his name right, too.

Fitzpatrick did sound slightly miffed about the lack of photos of him dotted around the Earth Course this week, though.

"It's funny you should mention that…." US Open champion Fitzpatrick replied to Corrigan with a smirk on his face.

"What can I say? It's a recurring theme. Not that it bothers me.

"Perhaps if I win for a third time…"

Fitzpatrick is certainly in with a good chance of completing a DP World Tour Championship hat-trick (2016, 2020) this week as he shares the halfway lead on 12-under par with Hatton.

The English duo have a three-shot buffer on the rest of the field, which includes Alex Noren and Adri Arnaus on 9-under par.

Two-time DP World Tour Championship winner Jon Rahm, who was also given Honorary Lifetime Membership of the DP World Tour this week, is a further shot back on 8-under par.

McIlroy played the last three holes in 4-under par to rally late for a 68 but he has plenty of work to do back in the chasing pack at 5-under par.

Next Page: Jon Rahm admits he's tired of hearing about one thing, and it's not LIV Golf