Scottie Scheffler, Justin Thomas, Collin Morikawa and Viktor Hovland all missed the cut at the Genesis Scottish Open as the wind causes havoc in North Berwick. 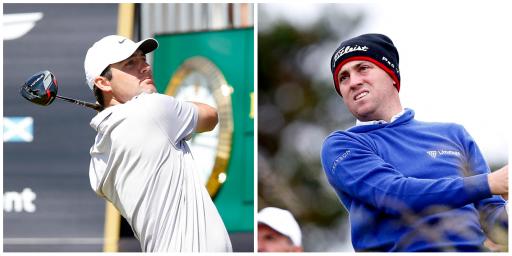 Four of the world's top 10 players didn't make the weekend at the Genesis Scottish Open as the winless Cameron Tringale still leads the way.

World No.1 Scottie Scheffler never took to The Renaissance Club from the first tee shot on Thursday. He shot rounds of 73 and 72 to finish on 5-over which was two shots off the cut of 3-over-par.

We saw an agitated and openly frustrated side to The Masters champion that we haven't seen in the past. Each of his four wins in 2022 has been done in an almost jovial and relaxed fashion.

"Well, today I actually played fine. I got a couple really bad breaks on the front nine. Outside of that, I played fine today. Yesterday was the day where I played just absolutely horrendous," Scheffler said after his round on Friday.

Reigning Open champion Collin Morikawa performed disappointingly too. He shot a 71 on Thursday which was by no means poor, but a 74 in the second round meant he finished on 5-over-par with Scheffler.

The two-time major winner came 71st at last year's Scottish Open a week before winning the Claret Jug at Royal St. George's, so this could perhaps work as a good omen again in 2022.

Justin Thomas put in one of his most disappointing displays in a long time. He shot a 77 yesterday, including eight bogeys and a double-bogey, to finish on 10-over-par for the week.

World No.8 Viktor Hovland never got going with rounds of 74 and 73 in East Lothian. The young Norwegian hasn't made a top-10 since The Players Championship in March.

Will Zalatoris, Hideki Matsuyama, Billy Horschel and home favourite Robert MacIntyre also will not tee it up this weekend.

Next Page: Max Homa plays another 18 holes after Genesis Scottish Open second round