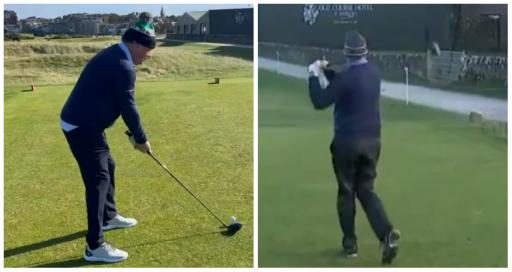 Much like Zach Johnson won't stop accidentally hitting golf balls, it appears the divisive broadcaster and journalist Piers Morgan has a problem of similar nature with the Road Hole at St. Andrews.

Specifically, Piers Morgan has a problem with hitting the Old Course Hotel. Piers Morgan will never stop doing this.

The year is 2030 and we are playing the Alfred Dunhill Links Championship again. Rory McIlroy is busy swatting away criticism as he searches for his fifth major.

In absolute fairness to Morgan, the Road Hole is one of golf's toughest tee shots. Scrap that, it's one of the toughest holes to play in general.

If you manage to make it round the corner of the Old Course Hotel, you've then got to hit a green that is guarded by the famous bunker at the front, which Cameron Smith expertly navigated so well in June.

Oh, and don't forget that you've also got to factor in the road and a stone wall at the back. Earlier in the week, Tommy Fleetwood showed us just how it's done in his practice round.

But Morgan is not Tommy Fleetwood. And he's not Cameron Smith.

He's an amateur hack like the rest of us chumps. And he's playing on live television.

Can we just pause for a brief second and appreciate the nervous twitching before he hit that tee shot?!

You could tell it was on his mind. I mean, how could it not be?!

Morgan, 57, was playing alongside Marcus "The Bullet" Armitage and the pair were going well up until this point, 16-under for the tournament.

The last time he struck this tee shot at the Alfred Dunhill Links Championship, he was playing alongside Scot Connor Syme.

This was last year's attempt:

Mind the windows, Piers... @piersmorgan experienced a moment to forget at the Alfred Dunhill Links Championship, sending his tee shot out of bounds and hitting the iconic hotel at St Andrews! pic.twitter.com/Bdxgi1I9UG

As Morgan rightly points out, at least he's consistent. Right you are Piers, right you are.

We are looking forward to next year.