Greg Norman says personal criticism over LIV Golf does hurt as he once again decided to address the R&A's frosty attitude to the controversial series. 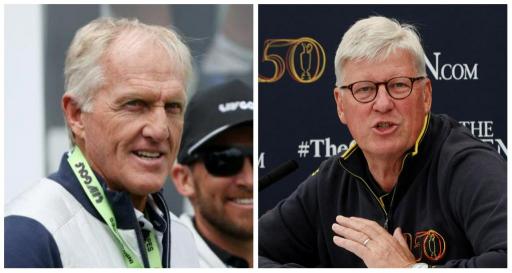 LIV Golf Tour chief executive Greg Norman - who this week blasted Rory McIlroy - has taken aim at the R&A as he once again claimed he is not trying to destroy the PGA Tour.

Speaking to Piers Morgan on Talk TV, the Great White Shark, 67, explained how at times "my heat shield gets a little bit weak" over the barrage of criticism he has received since the emergence of the LIV Golf Invitational Series.

He then slammed the R&A as "petty, cheap and childish" over the governing body's frosty attitude towards the fledgling circuit before, during and after the 150th Open Championship at St. Andrews in June.

Related: 9 players who changed their minds about LIV Golf

Two-time Open winner Norman was asked not to attend the past champions' dinner before the landmark major. At the time, Norman confirmed LIV had applied for Official World Golf Ranking accreditation, too.

Related: Does Branden Grace have regrets about LIV? Yes...

The debate about world ranking points and LIV continues to rumble on. Norman has claimed, to SI's Bob Harig, that he believes LIV are being "slow played" over this process.

McIlroy, speaking before the Alfred Dunhill Links Championship, seemed receptive to the idea of LIV existing within the ecosystem of professional golf but the Northern Irishman wants Norman's league to adhere to the criteria and not "make up their own rules".

"To be honest with you Piers, at times, my heat shield gets a little bit weak because, you know, I am a human being," said Norman.

"I took a mission on myself as an individual player to fly all around the world. I was the first guy to do an exhibition match in mainland China and I was one of the first guys to go into the Middle East and do that.

"And through my golf and businesses at the same time; I continued to do that."

Greg Norman’s take on how he’s been treated by the golf world after starting LIV is an interesting listen. Thoughts on this?

He added: "So when they do these ... what happened at the R&A [at the 150th Open] was a petty, cheap, childish shot to be honest with you.

"And if you can't rise above it all - shame on you. Because if you under pressure from other people exerting pressure on you, shame on you.

"For you not to sit down and have a discussion and to understand what the LIV business model is and, to see how it sits in the ecosystem, shame on you.

"[You have to] unpack it all to see if you can actually work together within the system to make both entities better, not try and destroy us."

He added: "We haven't tried to destroy the PGA Tour."