Cameron Smith appears to show no sign of stopping the celebrations just yet after claiming the 150th Open Championship at St Andrews. 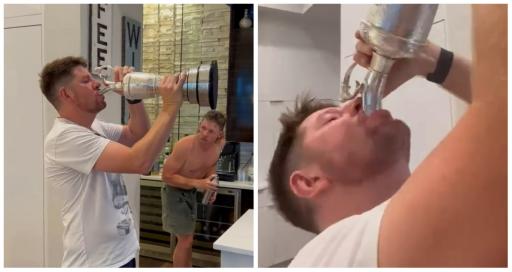 It's fair to say Cameron Smith is still very much dining out on his win at the 150th Open Championship at St Andrews.

Despite getting a little bit frosty with a reporter when he was asked about the likelihood of signing for LIV Golf, it's not unreasonable to suggest that Smith has been going full throttle with the celebrations.

The mullet-haired Australian, 28, famously explained he wanted to see just how many beers he could fit inside the Claret Jug. He later revealed that it was in fact two before he hopped on a plane home.

I mean, this man had just won The Open and took home $2.5million and he flies coach...

Smith also took home just shy of $1.5million for winning the Sentry Tournament of Champions, $3.6million for taking down The Players at TPC Sawgrass as well as another handsome pay day at The Masters despite the heartbreak.

I guess Smith just likes to roll that way...

And it appears that Smith is still very much revelling in his victory at the landmark major. I mean why wouldn't you?!

If you didn't know, this isn't the real trophy. It's a replica. The real one is kept at the home of golf under lock and key.

Smith will still have to hand this trophy back next year.

A breakdown of his earnings in 2022 are as follows: