Rory McIlroy's father Gerry McIlroy provided a moment of pure comedy during the third round of the Alfred Dunhill Links Championship on the DP World Tour. 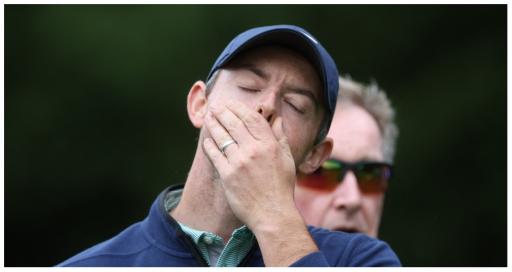 Rory McIlroy's father Gerry McIlroy unintentionally provided a moment of pure comedy during the third round of the Alfred Dunhill Links Championship on the DP World Tour.

McIlroy Senior was taking aim at the par-5 14th hole at the Old Course. He wasn't happy with his tee shot, as it sprayed out to the right. And fast.

He's likely said way worse on a golf course. No doubt you have as well. I know I have.

Perhaps he forgot briefly that the cameras would be rolling. No sooner had his golf ball hit the club face of his driver did he say: "Ah, s***!"

In truth, the moment was made slightly funnier as Sky Sports commentator Ewen Murray said before his shot: "Another chance to have a look at the swing of McIlroy Senior..."

Then he added: "Maybe I should apologise for that..."

Watch the clip below, per Bunkered's Michael McEwen:

"Another chance to have a look at the swing of McIlroy Senior."

It didn't matter too much in the end, as his 33-year-old son chimed in with a birdie to help the team score.

Earlier in the week, other than yet again talking about the LIV Golf Tour, McIlroy said he primarily wanted to enjoy the week with his dad.

"If I play well and, if I have a chance to win, that's great," McIlroy said, who won the PGA Tour's FedEx Cup earlier in the month and is leading the rankings heading into the final stages of the season.

"But it's not at the forefront of my mind, put it that way. I'm here to have a good week with my dad and enjoy it."