Thomas Pieters gets to replace ball after doing THIS at Open de France!

Thomas Pieters with one of the most bizarre moments on the DP World Tour this season. 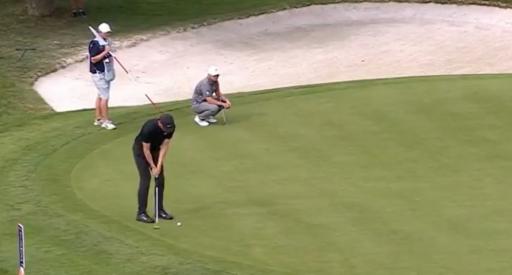 Thomas Pieters encountered one of the most bizarre moments on the DP World Tour this season when he tried to stop himself from putting after being distracted by someone in the crowd on day two at the Open de France.

Pieters was putting from 34 feet for birdie on the par-5 3rd when he was put off by a child's cough in the crowd.

The Belgian tried to stop himself from hitting the ball but he could not and his ball travelled a couple of feet.

Pieters was fortunately able to replace his ball as the stroke was not intentional.

This falls under Rule 13.1 D in the rules of golf, which you can read more about below.

However, according to Pieters after his round, an official told him that he should have received a penalty.

So kid coughed in my backstroke. I tried to stop…didn’t Called a local referee who called another referee who both deemed it not a penalty. That decision is final. Got told after I finished it should have been a penalty but original ruling stands. #Luckyidiot pic.twitter.com/ifRofhmmMq

No doubt golfers all around the world will be calling for this rule after a bad putt this weekend!

Pieters went on to make a par on the hole as he goes in search of runaway leader Rasmus Hojgaard, who has raced into an eight-shot lead on 15-under par after 36 holes.

There are two specific Rules for a ball or ball-marker that moves on the putting green.

(1) No Penalty for Accidentally Causing Ball to Move. There is no penalty if the player, opponent or another player in stroke play accidentally moves the player’s ball or ball-marker on the putting green.

Replace the ball on its original spot (which if not known must be estimated)
Place a ball-marker to mark that original spot.

Next Page: Jordan Spieth's approach to Ping Pong at the Presidents Cup is hilarious!