Rafael Nadal is not only a talented tennis player, but he is also handy on the golf course. 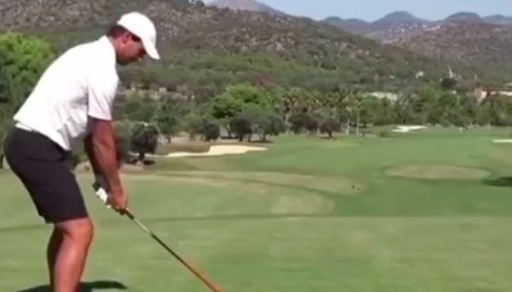 Rafael Nadal is one of the best tennis players that we will ever see. He has been part of a truly golden generation of the sport alongside Roger Federer and Novak Djokovic.

He has won 20 grand slam titles which equals the all-time record alongside Djokovic and Federer. He has won the French Open a staggering 13 times and he has earned the nickname of the 'King of Clay'.

The 35-year-old has spent 209 weeks at the top of the ATP rankings in his career and he will always be remembered for his battles with Federer at Wimbledon.

Nadal is clearly a massively talented sportsman and it is well documented that he does not only excel at tennis, but he is a handy and keen golfer as well.

The Spaniard plays off scratch, which is a level that the majority of us dream of getting to. He is known for his fantastic lefthanded strikes on the tennis courts, but on the golf course, he is righthanded.

In 2020, Nadal competed in the Balearic Golf Championships which is a 54-hole golf tournament held in Spain. He finished in an impressive sixth place.

He played in the same tournament in 2021 and he was the top-seeded player in the mid-amateur competition. Is there anything that Rafa can't do?

Nadal is a big fan of Tiger Woods and he has before said he loves Woods' attitude to golf and he follows him at every tournament he plays in.

He has also described the 15-time major winner as an inspiration in the past and it is clear that Nadal has used this inspiration to achieve a great handicap.