Richie Ramsay on disturbing Tiger Woods in a portaloo! 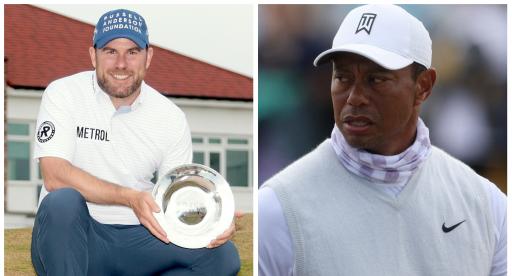 Richie Ramsay has revealed the hilarious moment that he rattled a portaloo with his putter while Tiger Woods was inside during the 2007 US Open.

Ramsay, who recently landed his fourth DP World Tour title at the Cazoo Classic, was afforded the luxury of joining Woods and defending champion Geoff Ogilvy in a three-ball for the first two rounds of the 2007 US Open at Oakmont having won the 2006 US Amateur.

Despite going on to miss the cut that week, Ramsay did leave with one particular memory, and it still embarrasses him to this very day.

RAMSAY REVEALS ALL BELOW:

"So I was playing with Ogilvy and Tiger at Oakmont, and of course when you're playing with Tiger, I've never seen even seen the guy in real life before so it was pretty daunting," Ramsay told DP World Tour on its 'Life on Tour' podcast.

"There is a walk through to the 11th tee, it's like a 200 yard walk through trees, and I'm kind of lagging behind as I've just made double bogey.

"My caddie has gone ahead of me and I'm swinging the putter and I'm like 'this is not a good idea cos I just feel like I want to throw it away'.

"There is a portaloo like half way down the walkway and there is nobody there, and I've just rattled this portaloo with the putter.

"I keep walking and as I walk up to the tee, I look up and can see Squirrel, who is Geoff Ogilvy's caddie, Geoff Ogilvy, Steve Williams (Tiger's caddie), my caddie and no Tiger Woods.

"So he comes up and he just looks up. I'm at the back and trying to hide behind my caddie because I've just absolutely rattled this portaloo. He's obviously been inside and he must have had the shock of his life."

Woods went on to finish one shot behind eventual winner Angel Cabrera in second place on 6-over par.