Despite hitting his tee shot on the 17th hole into the trees, Rory McIlroy recovered to make a birdie to sit one shot behind the leaders with one round of the BMW PGA Championship remaining. 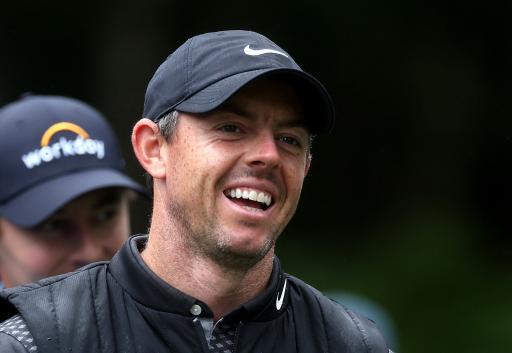 Luck was smiling on Rory McIlroy this afternoon at Wentworth as his ball escaped the trees on the 17th hole which led to his fourth of five birdies in the second round of the BMW PGA Championship.

When the Northern Irishman arrived on the 17th tee box, he was three shots behind Viktor Hovland and Soren Kjeldsen, who had carded respective scores of 68 and 64 to reach 12-under-par.

McIlroy hooked his tee shot on this penultimate par-5 and his ball looked doomed. After some clattering noises in the trees, his ball finished on the fairway. He hugged playing partner Matt Fitzpatrick in relief.

He made a four and he followed this significant twist of fate with another birdie on the last hole. Prior to this drama, the 33-year-old had eagled the par-5 4th hole. His 7-under-par 65 took him to 11-under for the week.

"I'm excited about tomorrow.  I haven't played one of these events, so it's going to be interesting to see how it feels," McIlroy said after his round on Saturday.

"It's going to be good.  I'm right in the thick of things, only one behind.  It's going to be exciting.  There are so many guys up around the top of the leaderboard.  So it will be a sprint to the finish, that's for sure.

" I have no idea (what happened on the 17th hole). I was actually saying to the boys, could you imagine we get up here and it wasn't my ball?  Sort of knocked the ball from the trees down or whatever."

McIlroy, who won the BMW PGA Championship in 2014, is in tied third place with fellow Europeans Rafa Cabrera-Bello and Thomas Detry.

Francesco Molinari, the Open champion of 2018 and winner of the DP World Tour's flagship event in the same year, also carded 7-under-par to reach 10-under for the week.

Also on 10-under is Shane Lowry. The 35-year-old birdied his final two holes on Saturday and through 36 holes of this reduced 54-hole event, he is yet to make a bogey.

Two shots further back is defending champion Billy Horschel. Winner of the Memorial Tournament in 2022 on the PGA Tour, Horschel carded three bogeys in his last six holes but added an eagle at the 17th hole.

The English duo of Fitzpatrick and Eddie Pepperell is also on 8-under-par in what promises to be an exciting finish to an extraordinary week in Surrey.