Sergio Garcia appeared at the Alabama at Texas college football match on Saturday having withdrawn from the second round of the BMW PGA Championship. 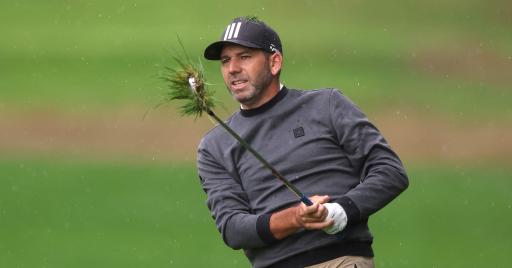 Garcia's withdrawal was announced on Saturday morning, ahead of the second round of the event at Wentworth. No reason was given for the Spaniard pulling out.

After the death of Queen Elizabeth II on Thursday evening, play was suspended for a whole day on Friday and the tournament was converted into 54 holes. The third and final round will take place today.

Ahead of the Alabama at Texas college football match in Austin, Garcia was spotted by the cameras ahead of kick-off with his wife Angela. World No.1 Scottie Scheffler and his wife Meredith were also in attendance.

The match kicked off at noon eastern time on Saturday. In the first round of the DP World Tour's flagship event on Thursday, Garcia struggled to a 4-over-par 76.

The 42-year-old was not the only player to withdraw in Surrey. Justin Rose, Ryan Fox, Kristoffer Broberg, Nino Bertasio and Andrea Pavan also pulled out.

Garcia was one of the big European names to make the switch to the LIV Golf Series and tension was expected at the BMW PGA Championship between those who moved and those who've stayed on the PGA Tour and the DP World Tour.

Despite Rory McIlroy revealing that he didn't have much of a relationship with those who've moved to the Saudi-backed series, Billy Horschel said he hadn't seen any "lively discussions in the locker room."

Horschel appeared to be part of a lively discussion himself with Ian Poulter on the putting green on Wednesday, which has been the source of much speculation.