Ryan Fox is on course to pick up his second victory of the DP World Tour season after a 66 on Saturday put him on top of the leaderboard at the Soudal Open. 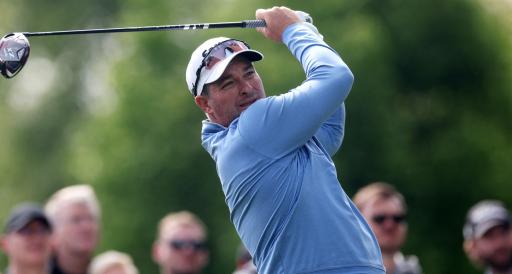 Ryan Fox put himself in position A to win for the second time on the DP World Tour in 2022 on Saturday, shooting a 66 to lead the Soudal Open by one after 54 holes.

Fox won the Ras al Khaimah Classic in February and he now leads Sam Horsfield by a narrow margin with 18 holes remaining at Rinkven International Golf Club in Belgium.

The man from New Zealand began the third round two shots behind Horsfield, Dale Whitnell and Matti Schmid. He started fairly tamely with one birdie and one bogey in his first nine holes.

Fox set the back nine alight in Antwerp, making five birdies to reach 11-under-par for the tournament. In 54 holes, he has made 21 birdies.

The 35-year-old has been one of the tour's more consistent players in 2022. He has made the top-15 in all of his last four appearances including his win in the UAE.

Horsfield, who is also a two-time winner on the DP World Tour, briefly took the lead with a birdie on the 11th hole. He couldn't add any more, but his solid 69 put him into contention.

The Englishman is currently ranked 29th on the DP World Tour money list and both of his career wins came within weeks of each other in August 2020.

Horsfield is on 10-under-par and the German Yannick Paul is one shot further back on 9-under-par. Oliver Bekker leads the group of four players on 8-under-par.

Lev Grinberg, the 14-year-old wonderkid who became the second-youngest ever player to make a cut on the tour on Friday, shot a 76 on day three to fall back to 2-over-par for the week.

Next Page: Have the Titleist Vokey SM9 wedges IMPROVED my game?