Germany's Matti Schmid went low at the Soudal Open to get in to a tie for the lead after 36 holes on the DP World Tour. 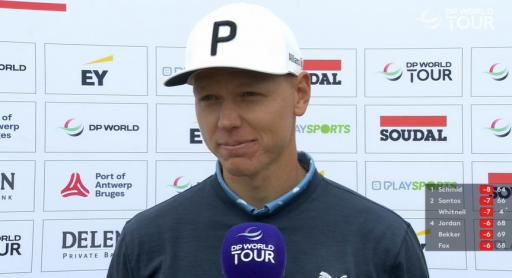 England's Sam Horsfield and Dale Whitnell are in a three-way tie for the lead after 36 holes at the Soudal Open on the DP World Tour.

Germany's Matti Schmid joins Horsfield and Whitnell at the top of the leaderboard at Rinkven International Golf Club in Antwerp, Belgium.

It was Schmid, 24, who went lowest of the day with a superb 7-under 64. Schmid made eight birdies in his round and only dropped one shot at the par-4 ninth.

During the first round, Whitnell was on 59 watch after he found himself 9-under par through 16 holes. He then finished double bogey-bogey for a 6-under 65.

Whitnell followed that with a 2-under 69, as did Horsfield. Horsfield, 25, is looking for his third win on the DP World Tour.

For Whitnell, the 33-year-old is searching for his maiden win. He has, however, won on the Challenge Tour before. That victory came in 2019.

Lev Grinberg, from Ukraine, has caught the eye of the golfing world this week. He is a 14-year-old amateur and is at 3-under par, in a tie for 29th, after 36 holes.

The projected cut is level par.

Elswehere, Portugal's Ricardo Santos is one stroke behind the leaders.

"I had a few nice putts, gave myself looks," said Schmid. "I hit the ball well, I hit a lot of nice wedges which you've got to be able to do out here and I was able to make some putts today."

Schmid added: "We only played 18 holes of practice round and he [his caddie] knows the course quite well."

The German described his season so far as "in between".

"Hopefully I play a good weekend," he added.