Jordan Spieth and Justin Thomas relaxed in the evening after day one of the 2022 Presidents Cup with a light-hearted game of ping pong. 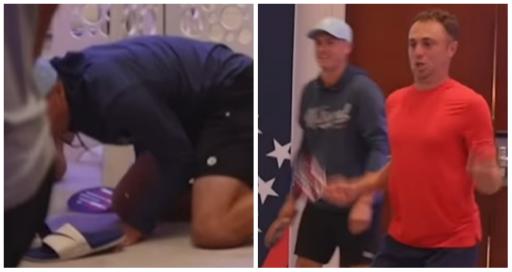 Jordan Spieth appears to approach a light-hearted game of ping pong in similar fashion to when he is on the fairways... by talking to his ball.

When events like the Presidents Cup roll around, we always see content from behind-the-scenes of the players enjoying team bonding sessions.

This week is no different at Quail Hollow. Spieth, who teamed up with Justin Thomas on day one to defeat Corey Conners and Sungjae Im 2&1, relaxed in the evening after helping the U.S. side race to a 4-1 lead with a game of ping pong.

The Spieth and Thomas partnership continued and they took on Collin Morikawa and Sam Burns.

Related: JT won't let Jordan Spieth forget how bad he was in 2019

Can we also just appreciate the fact that Spieth also dived and fell to his knees trying to return one shot.

The man just lives for danger, on and off the course.

When asked why he enjoys partnering Thomas so much in Ryder Cups and Presidents Cups, Spieth told the media: "It's really fun, right? He's my best friend in the whole world.

Spieth and Thomas were due to play the International pairing of Adam Scott and Cam Davis on day two of the Presidents Cup in the fourball (better ball) format.